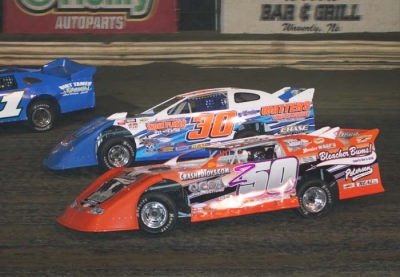 EAGLE, Neb. (April 5) — Todd Cooney of Des Moines, Iowa, proved up to the challenge in Saturday’s opening night IMCA-sanctioned Deery Brothers Summer Series feature at Eagle Raceway. Cooney followed the top groove in catching leader Tom Darbyshire on the 15th circuit, then led to the finish of the 35-lapper for a $1,000 payday. The tour victory was his career fifth and headlined the first of two Icebreaker Challenge programs at Eagle. Sunday's feature pays $2,000 to the winner. | Saturday slideshow | Sunday race at Eagle

Boone McLaughlin of Mediapolis, Iowa, who transferred to the feature through a consolation race, rallied from his 20th starting spot to finish second ahead of Craig Roberts, Jason Frankel and Mike Klinkhammer.

Mike Garland drew the pole and led the opening lap before giving way to Darbyshire. After a lap-three caution, Darbyshire got settled into the fast lower line but couldn’t shake Cooney, who found his way past on the high side. The front pair got into lapped traffic before the second and last caution of the contest came on lap 19. Cooney stayed in command following the restart and McLaughlin, Roberts, Frankel and Klinkhammer motored by Darbyshire. McLaughlin would get the edge in the battle for second but couldn’t challenge Cooney in the race to the checkers.