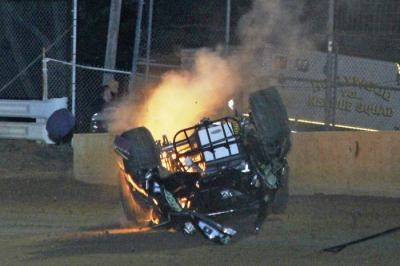 BUDDS CREEK, Md. (May 18) — As he walked toward victory lane, Ben Bowie wasn’t even sure if he’d won.

In fact, Bowie of Brandywine, Md., had won the unsanctioned weekly event for his second victory of the season, but it came at a hefty price.

After running second to Scott Adams for nearly the entire race, Bowie capitalized a bobble by Adams exiting turn four on the final lap to edge ahead slightly for the victory.

But as the lead duo crossed the finish line disaster struck. Contact between the two cars turned Bowie’s machine sideways on the front straightaway. His car dug into the racing surface, sending him for a wild end-over-end ride before his car came to rest on all four wheels at the entrance of turn one.

As the car landed in a cloud of smoke and debris, fire erupted under the hood of the machine and after a few tense moments, Bowie clambered from the battered machine, shaken but otherwise OK after the spectacular incident.

“Wow, I’ve flipped a race car down here before, but nothing like that.” Bowie said. “I don’t know what he (Scott Adams) was thinking. I was all the way down on the bottom of the racetrack coming off four, and he turned right into my door under the flagstand.”