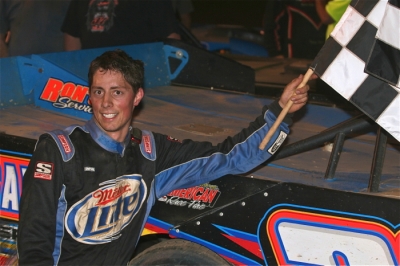 Marlar came from deep in the field to challenge Hawkins late in the unsanctioned 50-lapper, but the second-starting Hawkins held him off by less than a car length at the finish.

Jared Hawkins, the winner’s older brother, was involved in an early caution, but rallied from the tail of the field to finish fourth ahead of Corey Conley of Wellsburg, W.Va.

Notes: The winner’s race car is sponsored by Miller Lite, Moser Engineering and St. Henry Nightclub. … Jared Hawkins also scored his biggest victory at Tyler County last season, winning the $25,000 World of Outlaws Late Model Series Black Diamond 125. … Sheppard drove the Rocket house car to a weekly event victory the previous night at Wayne County Speedway in Orrville, Ohio. … Keith Barbara of South Park, Pa., and Eddie Carrier Jr. of Salt Rock, W.Va., both started near the front, but were involved in cautions. … Devin Moran of Dresden, Ohio won a heat race, but came up light at the scales. … Tyler County returns to action May 26 with the $25,000-to-win Jackpot 100 for the WoO tour. The event is part of a Memorial Day weekend tripleheader for the series that also includes stops at Wayne County on May 26 and I-77 Raceway Park in Fairplain, W.Va., on May 27.