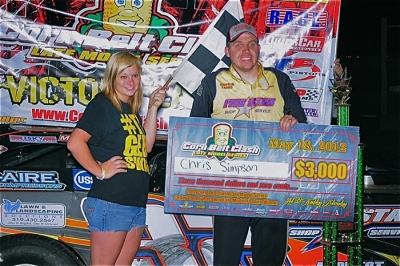 TIPTON, Iowa (May 18) —Chris Simpson of Oxford, Iowa, broke through for his first victory of the season Friday night at Cedar County Raceway, topping his older brother Chad Simpson to score a $3,000 payday in Dart Corn Belt Clash action at the quarter-mile oval. | Slideshow

Starting from the pole, Chris Simpson set a torrid pace early in the ---lapper. Even after several early cautions erased his lead, Simpson was still able to keep strong control out front as he was pursued closely by his brother-in-law Andy Eckrich and his brother Chad.

Chad Simpson worked his way by Eckrich for second just before the caution flew with one lap remaining, setting up a green-white-checkered battle to the finish between the two Simpson brothers.

Using a strong restart, Chris Simpson jumped out to a two-car length lead when the race went back green and never relented. He held the same advantage as he took the checkered flag for the victory.

The older Simpson settled for the runner-up finish while Eckrich of Iowa City, Iowa, was third. Jeff Larson of Freeport, Ill., and Justin Kay of Wheatland, Iowa, rounded out the race’s top five finishers.

Notes: The winning Simpson brother drivers a Longhorn Chassis powered by a Pro Power Racing engine and sponsored by GearWrench, Five Star Shop Service and Christner Concrete. … Chris Simpson is a distant second to his brother on the tour’s all-time win list. Chad has 16 career victories. … The two brothers have combined to win three of the four Clash events held at Cedar County. Chris also won the track’s only series race in 2011 while Chad split victories with Jeff Aikey of Waterloo, Iowa, in 2010. … Tim Isenberg of Marshfield, Wis., earned the race’s Hooker Harness Hard Charger Award for his 12th-to-sixth run. ... The Corn Belt Clash Series returns to action on May 27 with $4,000-to-win event at I-80 Speedway in Greenwood, Neb.