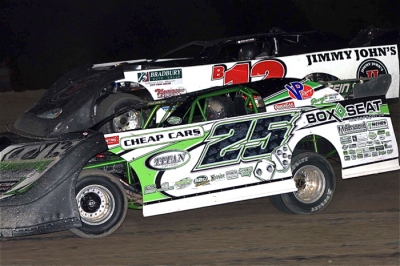 Kevin Weaver (12) and Jason Feger (25) battle for the lead at Kankakee. (Jim DenHamer)

KANKAKEE, Ill. (May 18) — Inheriting the lead when a number of other front-runners were collected in a mid-race pileup, Kevin Weaver of Gibson City, Tenn., lead the remaining distance of Friday night’s Sunoco American Late Model Series event and picked up a $2,000 victory at Kankakee County Speedway. | Slideshow

Tenth-starting Jason Feger of Bloomington, Ill., followed Weaver to the finish at the third-mile oval with Mike Spatola of Manhattan, Ill., third. Curtis Roberts of Coleman, Mich., was fourth with 12th-starting Scott Bull of Fairbury, Ill., rounding out the top five.

Weaver, who started fourth in the 40-lapper, was just outside the top five when a lapped car spun in front of the leaders, collecting among others polesitter Bobby Pierce of Oakwood, Ill., Shannon Babb of Moweaqua, Ill., Brian Shirley of Chatham, Ill., and Ryan Unizicker of El Paso, Ill.

Weaver suffered damage from the accident, but was able to continue on to score his first-career victory on the ALMS tour.