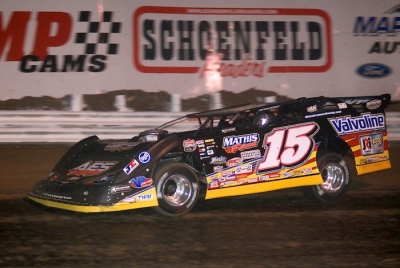 Steve Francis heads for victory in the fourth heat. (DirtonDirt.com)

LOCUST GROVE, Ark. (May 18) — When it comes to running Dirt Late Models at Batesville Motor Speedway, the conversation always turns to tires and tire wear, especially for long-distance events.

“It’s going to be a tire game before it’s all over and done,” predicted Francis, the Ashland, Ky., driver who will start fourth in Saturday’s main event at the high-speedway 3/8-mile oval.

Owens, the Newport, Tenn., driver and former Topless 100 winner at Batesville, had already heard reports from races earlier this season that caused a little concern.

“Tire wear is a concern because they say they’re wearing them out in 38 laps during a weekly show, so I don’t know what’s going to happen tomorrow,” he said. “I guess we’re just going to have to gear up and hope we last.”

O’Neal, of Martinsville, Ind., comes into the race gunning for his third consecutive series victory and fourth in his last five touring starts.

“A hundred laps around this place, you have to take care of your stuff and be there at the end,” O'Neal said, adding that things looked pretty good after his quick 12-lap victory. “That’s one good thing. Everybody else in the heat race seemed to hurt tires, and ours looked excellent. So that’s a plus for us.”

Francis, of Ashland, Ky., plans to pace himself through most of the feature “and see what happens there the last 10 laps of the race.”

“A hundred laps — or 98 laps — around here’s a long time, and it’s going to be about tires, making your tire last and taking care of your car ... I’m going to say it’s going to wind up the same as it always is.”

Batesville’s race was touted from the outset as one with a format like no other — the runner-up would receive more money than the winner.

Indeed, Saturday’s winner gets $10,000 while the second-place finisher gets $20,000, but the twist is this: the winner also receives a 2012 Chevrolet Camaro.

In a promotion that also includes a grandstand giveaway of a 2012 Ford Mustang, promoter Mooney Starr was pushing even those in the pit area to buy a few grandstand tickets to double their chances of winning an automobile.

“You can buy as many as you want,” he told drivers and crew members at the drivers’ meeting. “We take credit cards.”

Winless on the tour in 2012, Jimmy Owens said he’d gladly take the runner-up cash, but he’s not going to turn down a checkered flag either, especially while planning the future of his young son.

“If we can win tomorrow that’d be great,” he said. "I’d have Nathan a car for win he turns 16, and I’d just park it in the garage and live happily ever after.”

Hometown driver Billy Moyer Jr. joined his father among 16 drivers locking themselves into starting spots for Saturday’s Bad Boy 98, partly because he’s landed new but dependable crew members who are getting up to speed.

“I’m really braggin on ‘em,” said Moyer, who pays one while his father foots the bill for the other.

The younger Moyer opened the season with three-year crew chief Charlie Risen making plans to leave the team, so his crew situation was up in the air as he made plans to chase the rookie title on the World of Outlaws Late Model Series with sponsorship from Henderson Motorsports, Crop Production Services, Banner Valley Hauling and Car City.

He’s since abandoned his WoO plans to follow a regional schedule that will include at least the first stretch of the UMP DIRTcar Summerationals, but he’s more confident after some recent top-five finishes — including his first victory of the season last Saturday in Comp Cams Super Dirt Series action in Van Buren, Ark. — boosted by crew members Dennis Bequette and Matt Hubble.

Bequette has proven to be a fix-it-all handyman, a trait that comes in handy when there’s problems with the hauler or generator, while Hubble has been a selfless and hard worker. Both have put ego aside in learning their new duties, Moyer added.

Moyer’s crew search was done in part with postings on the Internet, and he combed through 100 applicants before hiring Hubble, who is from Jonesboro, Ark.

He hopes both crew members are up to speed by the time the Summernationals roll around next month, but even as he hired them, he warned them there’ll be some tough stretches to the season.

Jesse Stovall of Galena, Mo., started the season with plans to drive a Fred Bishop-owned car, then ended up making a few guest appearances for long-time Nebraska driver and team owner Al Humphrey.

After a March victory in Humphrey’s car at Clarksville (Tenn.) Speedway, Stovall hoped the teams could combine forces for a more potent combination. It didn’t turn out quite that way as Bishop decided to step away from fielding a car, but Stovall — a three-time winner this season including a $10,000 triumph at ArkLaTex Speedway’s Pelican 100 — is still in good shape.

Bishop sold his No. 00 Victory Circle Chassis to Humphey, and he’s still providing the hauler and a fuel sponsorship for the team as Humphrey takes over as the sole team owner. Stovall appreciates Bishop’s continued support and is glad to have Humphrey, himself a successful racer, to be at the track helping make the car go fast.

Stovall struggled in his heat race Friday at Batesville, finishing sixth, two spots out of transferring to the main event. He’ll start third in Saturday’s second consolation race with his final shot at making the 98-lap feature.

Unfamilar with the tires he was using and the time-trial format, Stovall said he was a little behind the eight-ball in battling drivers from the national Lucas Oil Late Model Dirt Series.

“I felt like we did decent. We could’ve done a little better,” he said. "I felt like I should’ve run a little different line there around (turns) one and two, but I chose not to to be more comfortable and safe, and I probably should’ve hung it out there like these guys do and gone for it.”

Meeting the challenge of the touring professionals is a tall order for regional standouts like Stovall.

“These guys are good. And I feel like I’m as good as any of the guys I race with on an weekly basis (on regional tours) ... I’m still a front two or three car with them guys ... but like I said, these guys are a whole different group of people and you just have to man up and try to get in there and get some. If you don’t race with ‘em on a regular basis, you can never know what to expect with ‘em,” he said. “It’s kind of like when your Mom and Dad teach you about school: you become who you hang around. Well, you become what you race around. End of story. If I had the opportunity and the money behind me to be able to race with these guys, I feel like I can race with ‘em.”

Promoter Mooney Starr was briefly alarmed when he heard a regional power supplier planned a blackout from 11 p.m.-3 a.m. to make repairs; he made a call and urged them to shut the power down after midnight. ... While there were no lead changes in heats won by polesitters, the first heat featured some back-and-forth action for second place between Scott Bloomquist and Jack Sullivan. Bloomquist claimed the spot, but he got too high in turn two on a lap-nine restart and slipped back to fourth, finishing behind Billy Moyer, Sullivan and Dennis Erb Jr. ... This is the second attempt to run the Bad Boy 98, an event sponsored by Batesville-based Bad Boy Mowers. Never-ending rain cancelled last year’s event. ... Will Vaught of Crane, Mo., was at Thursday’s practice session but loaded up after breaking his car’s rear end. ... John Anderson of Omaha, Neb., hit the wall in time trials and scratched from his heat race. ... Eric Turner of Springfield, Mo., was making his first Late Model start of the season in the Broken Bow, Okla.-based Pannell Motorsports No. 33x; Turner has stayed busy working as a representative for Roush Yates Engines the first half of the season. ... Lucas Oil Series officials experimented with a few teams following Thursday's practice with cars using 6-inch spoilers to see how that affected speed and handling. DirtonDirt.com plans a more detailed report of future experiments as the series considers ways to slow down cars and improve racing.