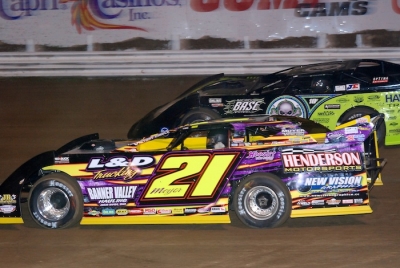 Billy Moyer (21) and Scott Bloomquist (0) started up front in the first heat. (DirtonDirt.com)

Joining Moyer and Owens as heat winners were Don O’Neal of Martinsville, Ind., and Steve Francis of Ashland, Ky., as they were among 16 cars were locked into starting spots for Saturday's 98-lapper.

The feature starters will be gunning for not only a $10,000 payday but a 2012 Chevrolet Camaro in a race where promoter Mooney Starr has added the quirk of paying the runner-up $20,000, twice the winner’s purse.

The winner won’t be the only person to go home with a new car. A drawing among fans buying grandstand tickets will give away a 2012 Ford Mustang during Saturday’s event, which begins with hot laps at 7:30 p.m. Saturday’s action includes a pair of consolation races and the main event.

Moyer was the fastest of 48 qualifiers on Friday for the event originally scheduled for 2011 but rained out.