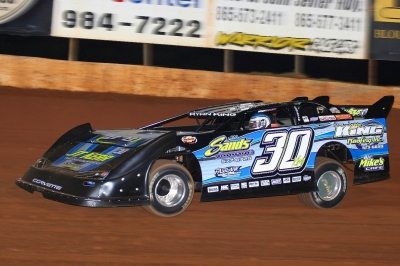 After a relatively slow start to the season, Ryan King didn’t have any particular reason to feel overly optimistic heading into this past weekend. But with three Late Model races in two nights on tap, the 20-year-old Seymour, Tenn., driver had a feeling things might go well.

King wasn’t surprised by his impressive three-victory weekend. He had shared with his father Brian King earlier in the week that he thought the sweep was possible.

“I told my dad before the weekend ever started, I said ‘My goal for the weekend is maybe win two races, but I just have a feeling we might can win all three,’ ” said the younger King, whose three victories more than doubled his win total for the season. “I’m not sure what it was, I just had a feeling we were gonna have a good weekend.”

The weekend performance was a welcomed improvement for King and his family-owned race team. With just two victories going into the weekend, King was becoming frustrated with the slow start to the year, especially following a 2011 campaign that saw the fourth-year Late Model driver amass a double-digit win total.

“It’d been kinda stressful ... with the way things were going at the beginning of the year,” said King, who’s chasing the NeSmith Weekly Racing Series championship this season. “We were finishing good, but it was like dang, we need to get some more wins. To get three of ‘em in one weekend, it definitely made me feel better.”

With a momentum boost from the past weekend, King has renewed hope in reaching his season goals. With 411 running NeSmith weekly sanctioning for the first time this season, King set out to win the track’s Crate Late Model championship and take a stab at NeSmith’s national weekly championship.

“Winning the NeSmith deal’s gonna be tough,” said King, whose two Stinger Race Cars are sponsored by JT Kerr Racing Equipment, Interior Mill Works, Brian King Roofing and Smokey Mountain Roofing. “You’ve gotta win a lot of races to keep up with those guys. I think we’ve got a shot at, but yeah, it would help to have a few more weekends like this one.”

Along with his points-chasing objectives, King has his eyes set on a pair of NeSmith’s touring events coming up in his home region when the Crate Late Model tour hits Boyd’s Speedway in Ringgold, Ga., on June 1 and 411 the following night.

“We’re really looking forward to running with those guys when they come around here, especially the one at 411,” King said. “A lot of them, that ain’t ran there before, so maybe we’ve got a leg up on ‘em for that.”

“We’re running the same (three races) this weekend,” King said. “so there’s always a chance we could do it again.”

• After a penalty for the leader handed him the lead, Jeff Aikey of Waterloo, Iowa, raced to victory May 12 at Independence (Iowa) Motor Speedway. Aikey took over after leader Bryan Klein was sent to the tail for twice jumping a restart.

• In May 12’s event at Adams County Speedway, only one of the top five finishers started in the first three rows. That was winner J.C. Wyman, who started sixth at the Corning, Iowa.

• Making a last-lap pass, Billy Drake of Bloomington, Ill., drove the Ray Neltner-owned No. 75 to a $2,000 victory at Peoria (Ill.) Speedway on May 13. Drake took the lead when Kevin Weaver struggled in traffic.

• Sweeping double features, Mitchell Coble of Mount Airy, N.C. had a big night May 12 at 311 Motor Speedway in Madison, N.C.

• Daniel Heck of Mount Vernon, Ill., had a double-victory weekend in Crate Late Models on May 11 at Tri-City Speedway in Pontoon Beach, Ill., and May 12 at Clay County Speedway in Flora, Ill.

• At Potomac Speedway on May 11, D.J. Myers led all the way and dedicated the victory in Budds Creek, Md., to his grandfather. “He passed away last season and he loved to go to the races,” Myers said. “I think he was up there watching us tonight and this win is for him.”

• Tad Pospisil of Norfolk, Neb., won May 11 in Albion, Neb., for his second straight victory at Boone County Raceway.

• At a reconfigured Merritt (Mich.) Raceway, Zack Olger clicked off a 13.76-second lap to lower the track record, but Eric Spangler of Lake City, Mich., won the feature event.

• Chad Becker of Aberdeen, S.D., nabbed a pair of May 12-13 victories at Dakota State Fair Speedway in Huron, S.D., and Casino Speedway in Watertown, S.D.

• In sweeping May 13 action at Quincy (Ill.) Raceway, Dustin Griffin of Camp Point, Ill., captured his first Super Late Model victory. He won his heat, the dash and led all 30 laps.

• Grabbing his first victory at a track where his father once dominated, Bobby Pierce won May 12 at Fairbury (Ill.) American Legion Speedway. The 15-year-old has two 2012 victories in 24 starts.

• At Skyline Speedway in Stewart, Ohio, teenager Nick Dohm of Cross Lanes, W.Va., notched his first career Super Late Model victory in one of two double features on May 11. His father Tim won the following night at I-77 Raceway Park in Fairplain, W.Va.

• Chuck Clise of Frostburg, Md., won May 11 at Bedford (Pa.) Speedway for his first Super Late Model victory at the 5/8-mile oval.

UMP DIRTcar: Brandon Sheppard of New Berlin, Ill., continues to lead the standings after week 15 of competition (April 30-May 6) with three victories on the season. Dewayne Kiefer of St. Genevieve, Mo., is eight points back in second with four wins, while Scott Schmidt of Tonica, Ill., sits third. Jim Moon of Zionsville, Ill., and Kevin Weaver of Gibson City, Ill., round out the top five.

AMRA: Reigning national champion Chris Garnes of Evans, W.Va., continues to lead the standings as action prepares to pick up with a number of sanctioned tracks kicking off their seasons over the next two weeks. With points updated on May 10, Garnes holds a hefty lead over Ronnie Mayle of Chesterville, Ohio, and Rick Williams of Beckley, W.Va.

ULMA: Jason Russell of Henley, Mo., stretched his points lead with a runner-up finish Friday at Callaway Raceway in Fulton, Mo., and a victory Saturday at Lucas Oil Speedway in Wheatland, Mo. Brandon Imhoff of Lake Ozark, Mo., is second after a notching a pair of runner-up finishes over the weekend while Chris Hawkins of Neosho, Mo., remains third. Brett Wood of Warrensburg, Mo., jumped to fourth in the standings after claiming his first victory of the season Friday night at Valley Speedway in Grain Valley, Mo.

NeSmith: Tony Lawson of Laurel, Miss., continues to lead the standings after a weekend that saw six sanctioned events axed by rain. Lawson holds a 15-point lead over Shannon Lee of Lumberton, Miss., who moved to second with a runner-up finish Friday at Hattiesburg (Miss.) Motorsports Park. Ryan King of Seymour, Tenn., is third after winning 411 Motor Speedway’s event Saturday while Scott Ladner, also of Lumberton, is tied with Mickey Trosclair of Luling, La., for fourth.

IMCA: Nate Beuseling of Silvis, Ill., tops the standings based on points updated May 10 with a 51-point advantage over reigning national champion Ray Guss Jr. of Milan, Ill. Todd Malmstrom, also of Silvis, is third with Chad Cooney of Des Moines, Iowa, and Mike Murphy of Colona, Ill., rounding out the top five.

Belle-Clair Speedway: The Belleville, Ill., track’s Battle at BelleVegas on May 18 includes a $2,000-to-win Late Model event along with Lucas Oil POWRi midgets and micro sprints.

Muskingum County Speedway: The track just north of Zanesville, Ohio pays $3,000-to-win for the annual Memorial race for Super Late Models on May 18.

Ponderosa Speedway: The Junction City, Ky., track is hosting the 13th annual Junebug Rowland Memorial on May 19, a $1,500-to-win event for Late Models; the track is also in action May 18 with a $1,000-to-win modified special.

Thunder Valley Speedway: The Central City, Pa., track is hosting the $2,000-to-win Shawn McGarvey Showdown on May 19. Along with the 30-lapper, Semi-Lates are also in action.

Fayetteville Motor Speedway: The North Carolina track is hosting a $1,500-to-win event for its Late Model division on May 19.