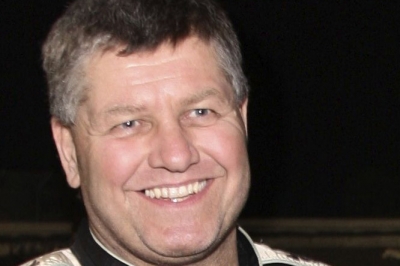 The first World of Outlaws Late Model Series event in six years at NAPA Auto Parts Wayne County Speedway might be coming at just the right time for Chub Frank.

It’s been nearly three years since Frank has won an main event on the renowned circuit, but his improved 2012 performance shows he’s on the verge of a slump-busting victory – and no track presents a better breakthrough opportunity for the veteran than Wayne County, which returns to the national spotlight on Fri., May 25, with a 50-lap, $10,000-to-win WoO program.

Frank, 50, of Bear Lake, Pa., was virtually unbeatable in special shows at Wayne County from 1999-2006, winning five times over the span. His triumphs came in events sanctioned by four different series, including the World of Outlaws in 2006 (the track’s only previous race for the tour) and three circuits that have since ceased operation: Hav-A-Tampa/UDTRA (2000 and ’01), MACS (’00) and STARS (1999).

“Wayne County has been pretty good to me,” bottom-lined Frank, whose five wins there brought him a total of $40,000 in earnings. “I just hope we can pick up where we left off the last time we were there.”

Frank’s recent results would seem to indicate that he’s primed for a vintage evening at Wayne County. While he hasn’t visited the 3/8-mile Buckeye State oval since May 6, 2006, when he overtook Tim McCreadie of Watertown, N.Y., with eight laps remaining to capture the WoO victory, he’s been knocking on the door to victory lane this season. He owns a pair of third-place finishes (Feb. 23 at Florida’s Volusia Speedway Park and April 27 at North Alabama Speedway) and, in the last WoO event on May 5 at Swainsboro (Ga.) Raceway, advanced from the 12th starting spot to place second.

With three top-five and seven top-10 finishes in 11 events this season, Frank is currently ranked third in the WoO points standings – the first time he’s sat third in the points race since July 21, 2008, after the 26th race of that season.

“We’re getting closer to a win,” said Frank, whose 93-race WoO winless streak dates back to his last victory on Aug. 22, 2009, at Atomic Speedway (then K-C Raceway) in Alma, Ohio. “We’re not quite where we need to be on our speed early on during the night (in time trials), but our cars are pretty good in the feature and we’ve had a little bit of luck.

“We need to get more consistent, but we’re working on it. (Chief mechanic) Derek (Gahring) has been working hard on the car, and (this week) John Volpe (a western Pennsylvania-area dirt Late Model driver) starts (working) for us (after graduating from college) so having another guy in the shop will help us out.”

Of course, in order to recapture his Wayne County magic, Frank can’t simply refer to his notes from his glory days there. More than half a decade has passed since he enjoyed his great success, so some readjustment will undoubtedly be necessary.

“I kind of know what the racetrack needs (for setup), but I’m sure they don’t use the same chemicals that they used to use on the track (surface),” said Frank, whose 16 career WoO victories puts him in a tie for seventh on the win list since 2004. “I think it’s gonna take different tires than what we used to run there. The track’s gonna be different. The cars are different – everything’s a lot different than it was back then.

“But (the track) used to be real racy, so I’m kind of hoping it’s still the way it used to be.”

According to Wayne County’s Kristin Flory, Frank should be very satisfied with the racing surface he’ll tackle on May 25. Flory, who manages the facility alongside her husband Jason, said side-by-side competition has been a staple in 2012 at WCS.

“The track’s been real good,” commented Flory. “We’ve been told we can’t use the same chemicals to prep the track that they used back then (when Frank was a dominating force in specials), so we’re using different things now and the track is different. But the bottom line is that we’ve had two- and three-wide racing all season, so as far as the racing goes I think it’s gonna be real good.”

The Florys are in their first full season at the helm of WCS. Both have put their own Dirt Late Model driving careers – Jason, 35, is a former Wayne County champion and Kristin, 32, has made a name for herself as one of the country’s top female racers – on the backburner to operate the speedway for Joe McIlvaine, the owner of a truck-leasing business and a sponsor of Jason’s racing efforts who purchased the track at auction last year. The nearly 50-year-old track sat idle in 2011 until reopening under the Florys’ direction on July 8.

“We’ve always thought about promoting a track,” said Kristin Flory, whose home in Creston, Ohio, is about 25 miles Northwest of WCS. “We actually looked into purchasing (Ohio’s) Lakeville (Speedway) 10 years ago but it didn’t work out. So when Wayne County came up for auction, we got together with Joe and we said, ‘If you go for it, we’ll be right there behind you and run the place for you.’”

After a successful half-season of action and an encouraging first month of the 2012 campaign, Jason and Kristin are looking forward to the arrival of the WoO. It’s the biggest event of their short tenure, a blockbuster holiday-weekend show that can go a long way toward putting the track back on the map.

Frank hopes he has a fun visit to Wayne County. He’s certainly ready for his return to the track.

“I did talk to some guys who ran there (this year),” said Frank. “A couple of my customers have run there, and Russ King (the 2009 WoO Rookie of the Year) won a race there a few weeks ago (the track’s season opener). They said you can pass, and that’s all that matters. As long as your car’s good, you can get to the front.”

Wayne County’s WoO card on May 25 – the tour’s first stop in Ohio since late-July 2010 – will also include the track’s open-wheel modified division.

Pit gates are scheduled to open at 3 p.m. and the front gates will be unlocked at 4 p.m. Hot laps are tentatively set to commence at 6:30 p.m., followed by Ohlins Shocks Time Trials and then racing at 7:45 p.m.

Pre-sale tickets are still available for the discounted price of $22. Call the speedway office at 330-465-2365 for more information.

The Wayne County event kicks off a Memorial Day weekend tripleheader for the WoO tour, which also visits Tyler County Speedway in Middlebourne, W.Va., for the $25,000-to-win Jackpot 100 on May 26 and I-77 Raceway Park in Ripley, W.Va., on May 27.