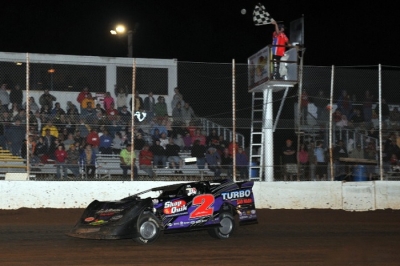 Anderson survived an early scrape with Chad Simpson of Mount Vernon, Iowa, and late pressure from Jesse Stovall of Galena, Mo., for the $3,000 victory at the quarter-mile oval. Justin Wells of Aurora, Mo., was third while Wendell Wallace of Batesville, Ark., and Tony Jackson Jr. of Lebanon, Mo. — who ran as high as second — rounded out the top five.

While Anderson got the jump and led the first lap, the third-starting Simpson slipped by to lead the second lap and took control early in the race. But tell-tale smoke began wafting off the rear of Simpson’s No. 25 as Anderson stalked him.

When Simpson switched from the high groove to the low groove entering turn three on the 17th lap, Anderson made contact and Simpson spun out of contention.

“You know, he was blowing all that oil out of there, and I was underneath him because when I followed him (in the high groove) it was slick off the top. And he decided to go down there and I slid in his oil and was right there,” Anderson said. "He knows it was a racing deal, I hope, you know. I don’t drive like that.

"It was early in the race and we were having a good race. But he was blowing up so much oil I was getting it all over my face. I was just trying to stay underneath him and biding my time there. He just cut down there and spewed some oil out and I had nowhere to go.”

Anderson inherited the lead for the restart ahead of Jackson and Wells while Stovall began making noise. Stovall used the high side to sweep into the second spot, and on a late-race restart, used the low groove to pressure Anderson.

Anderson was able to stave off Stovall’s charge to wrap up the 40-lap victory.

Notes: Anderson's MasterSbilt Race Car has a Jay Dickens Racing Engine and sponsorship from Shop Quik Convenience Stores, Allstar Performance and the FAITH Youth Team. ... The victory was Anderson’s second straight on the MLRA circuit and 26th of his career (sixth on the all-time list) ... He has three career MARS victories. ... Among drivers failing to make the feature lineup: Dustin Mooneyham, Jeff Roth, Don Cloyd and Bryon Allison. ... Next up for MARS competitors is a May 27 stop at Monett (Mo.) Speedway. ... MLRA drivers compete May 25-26 at Lucas Oil Speedway in Wheatland, Mo., for the Dart Show-Me 100, also an event on the Lucas Oil Late Model Dirt Series.