Blair fends off Briggs for ULMS win at Stateline 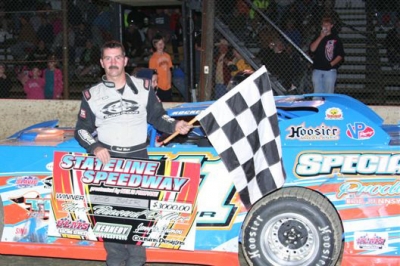 BUSTI, N.Y. (May 12) — Starting outside the front row, Robbie Blair of Titusville, Pa., outran Boom Briggs of Bear Lake, Pa., on Saturday at Stateline Speedway for a victory on the Kenney Motorsports United Late Model Series.

The 42-year-old Blair earned $3,000 in notching his first victory of the season while Briggs, who made a mid-race pass for the lead erased by a caution, settled for the runner-up spot after Blair pulled away late.

Boozel and Blair started on the front row with Boozel getting the jump into turn one but Blair taking control before the first lap was complete. Dutch Davies trailed Boozel with Briggs in the fourth spot.

Blair was flying low with nearly a straightaway lead after 10 laps. Briggs settled into the second spot followed by Boozel and Davies. Blair got into the end of the field, slowing his progress and allowing Briggs to cut the margin.

Briggs closed within three lengths with 10 laps remaining. Setting up on the outside, Briggs made the pass just before the first yellow for Brent Rhebergen stopped in the inside of turn four. The yellow saved the lead for Blair with nine laps remaining.

Blair edged away to a five-length lead after the restart and Briggs was unable to close the rest of the way.

Notes: Blair’s Rocket Chassis is sponsored by Specialty Products and Moody & Son Welding. ... He notched his ninth career ULMS victory, tied with David Scott as the most on the series. ... Scott wasn’t in action after breaking a wrist in a race last weekend at Eriez Speedway in Hammett, Pa. ... Jared Miley of South Park, Pa., made an 18th-to-ninth charge. ... Among drivers failing to make the feature lineup: Chad Valone, Jordan Eck, Dan Kienitz, John Volpe, Randy Lobb, Greg Oakes and T.J. Downs. ... Steve Kania won the night’s Limited Late Model feature and Max Blair (Robbie’s son) won the Crate feature. ... Next up for the series is a May 24 stop at McKean County Raceway in East Smethport, Pa.