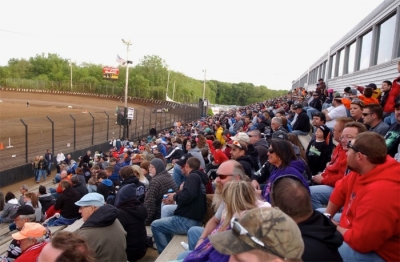 A healthy crowd turned out at La Salle. (rickschwalliephotos.com)

The 47-year-old O’Neal led all 50 laps en route to his series-leading seven victory of the season and third in his last four starts in creeping a bit closer to series points leader Jimmy Owens of Newport, Tenn., who finished second. | Slideshow | Video

"The car was awesome again all night long. We are just on a roll right now,” O’Neal said. "Jimmy had another good finish. He’s so consistent, that's what we have to develop to win this points title.”

Behind O’Neal and Owens was Brian Birkhofer of Muscatine, Iowa, in third while 10th-starting Steve Francis of Ashland, Ky., and two-time series champ Scott Bloomquist of Mooresburg, Tenn., rounded out the top five at the quarter-mile oval.

O'Neal had a clean sweep the previous night at the half-mile Hartford (Mich.) Motor Speedway, and despite racing at the smaller La Salle, brought out the broom again in setting fast time, winning his heat race and leading every feature lap for his 26th career Lucas Oil Series victory.

O'Neal sprinted to the lead at the start of the 50-lap main event and was quickly into traffic by the 10th circuit. Birkhofer ran second for several laps and restarted behind O'Neal after a caution came out on lap 22 for Shawn Toczek. With the field bunched up for the restart O'Neal pulled away from Birkhofer, increasing his lead with each scored lap.

Owens started eighth and challenged Birkhofer for second as the two raced side-by-side for several circuits with Owens finally clearing Birkhofer for second. The final caution of the race came out on lap 36 for Jonathan Davenport, who stopped in turn two after climbing as high as fifth.

On the restart, O'Neal pulled away from the field, stretching his lead out to several car lengths as Owens and Birkhofer continued to battle for second. Nobody had anything for O'Neal as he sped on for another appearance in Lucas Oil Victory Lane.

Notes: O’Neal’s Keith and Tader Masters-backed MasterSbilt house car is powered by a Jay Dickens Racing Engines and sponsored by Optima Batteries, Independence Lumber, Tarpy Trucking, Seubert Calf Ranches, O'Neal Mulch, Superior Cleaning Services, Jones Core, Budda Bert Transmissions, Dragon Race Fuels and Ohlins Shocks. ... The event drew 30 cars. ... Austin Hubbard of Seaford, Del., rallied from 13th to finish sixth to earn Optima Batteries Hard Charger of the Race honors. ... Among drivers failing to make the feature: Mike Provenzano, Steve Dimmick, Jason Jaggers, Mike Burgtorf, Mike Spatola and Jerry Lierly, who gave up his car to Dennis Erb Jr. after Erb had problems in his No. 28. ... Next up for the Lucas Oil Series is the May 18-19 Bad Boy 98 at Batesville Motor Speedway in Locust Grove, Ark., a race where the winner picks up $10,000 and a new car.