Stovall drives Humphrey's No. 6 to victory in Muskogee 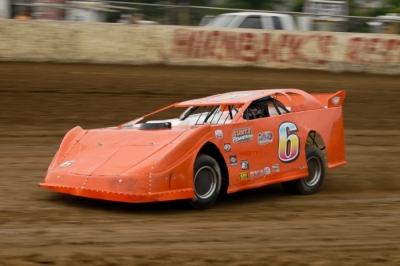 Jesse Stovall tunes up before his victory at Thunderbird. (hmmphoto.com)

MUSKOGEE, Okla. (May 11) — Pole-starting Jesse Stovall of Galena, Mo., drove the Al Humphrey-owned No. 6 to victory Friday at Thunderbird Speedway for his first victory of the season on the Comp Cams Super Dirt Series. Stovall pocketed $2,000 for winning from the pole position at the historic half-mile fairgrounds oval as he became the tour’s fifth winner in six 2012 races. | Slideshow

Justin Asplin of Birch Tree, Mo., was second followed by Curtis Cook of Conway, Ark. Series points leader Robert Baker of Bryant, Ark., and Jon Mitchell of Texarkana, Texas, rounded out the top five finishers on a night with 31 Late Model teams in the pits.

Stovall earned the pole for the 30-lap feature in prelims with Terry Phillips of Springfield, Mo., starting to his outside. Phillips led the first lap while Stovall inched ahead to lead lap two. Phillips was in front on the third lap when a caution flag flew for Johnny Virden, Dewaine Hottinger and Larry Campbell, who all tangled.

On the restart Phillips, motored back to the lead with Stovall, Ronny Lee Hollingsworth, Asplin and Cook in pursuit. Phillips maintained the top spot until a series of cautions slowed the action on lap 23. The first caution was triggered by a spinning Jon Kirby, who collected Kyle Beard. The second caution appeared when Hollingsworth slowed with mechanical problems that ended his night.

When the green flag reappeared, it would be the leading Phillips who suffered mechanical issues as he coasted to the infield, handing Stovall the lead. Stovall led the final seven laps en route to his fifth career Comp Cams victory.