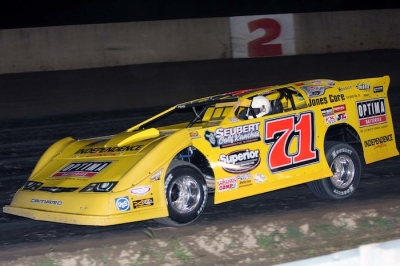 Driving the MasterSbilt Race Cars house car, O’Neal grabbed the lead at the outset and went on to his 25th career series victory and first-ever in the state of Michigan. He also set fast time among 37 entrants and dominated his heat race on a night when he vaulted to second from fourth in series points with the $10,000 feature victory. | Slideshow | Video

"The car was perfect all night long," said the 47-year-old O’Neal, who has two victories in the last three series events. "I have to thank (car owner) Tader Masters, (crew chief) Cody Mahoney, and the whole crew. After wrecking at Paducah last week, they worked hard to get the car ready for tonight. They make my job look easy.

“This is a big racetrack, they made us second-guess on tires after they watered the track, but we decided to stay with what we were originally thinking and it paid off.”

O’Neal ran virtually unchallenged the entire distance until 16-year-old Tyler Reddick of Corning, Calif., closed in on him with two laps to go as the leader negotiated the car of a slower Curt Spalding. Reddick tried to make a move when O’Neal got out of the preferred low line, but Reddick’s contact with Spalding cut down a tire and O’Neal slipped away.

The 11th-starting Reddick, who closed on O’Neal in traffic late in the race, ended up 15th after drawing the last of three cautions on lap 46.

Other yellow flags appeared for Guy Volk on lap 13 and for debris on lap 34 at the half-mile oval.