From team and track reports 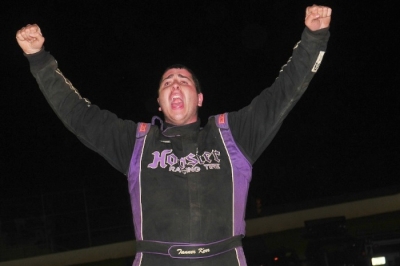 WINCHESTER, Va. (May 5) — Hometown driver Tanner Kerr had to take a moment to collect his thoughts before pulling into victory lane Saturday at Winchester Speedway. After all, the 20-year-old driver had a helmet full of tears after winning his first-ever Limited Late Model feature at the 3/8-mile oval.

It was an accomplishment that was a life-long dream of Kerr and his father Greg, who died nearly three years earlier in a Huntington, Pa., highway accident while hauling a race car back home.

“I can’t believe we’re finally here!” Kerr said in victory lane. “I can’t tell you what it means to finally win here. I know my dad was riding with me tonight.”

The first career victory was an emotional one for Kerr, who dedicated himself to keeping his father’s dream alive of winning in a Late Model at Winchester.

“I’m still not sure it has really sunken in yet,” Kerr said later from his team’s race shop. “This has just been an incredible experience. We’ve been close to winning, but something always happened at the end. When I saw the checkered waving coming off of turn four and there was no other car beside me, I realized it was really going to happen.”

A heat race victory gave Kerr the outside front-row starting spot for the 20-lap feature, and he quickly jumped to the lead in his No. 41*, going on to lead every lap. Andy Anderson of Martinsburg, W.Va., rallied from his sixth-row starting spot up to second after nine laps, but he couldn’t catch Kerr.

Justin Fulton posted his best finish of the season in third, Brad Ritter came for 28th for fourth and Jonathan DeHaven completed the top five on the night when the division drew a season-high 30 entries.

Greg Kerr, a former vice president of the Hagerstown (Md.) Quarter Midget Club, would’ve been proud of his son, who moved into the division points lead.

"When I was racing quarter-midgets, our goal as a family was to move up to a Late Model,” Tanner Kerr said. “To pull into victory lane with my mom, and girlfriend waiting for me was the best feeling I have ever had. I know without a doubt, my Dad was right there with us. We got that first win, and that is a big step in our goal to win the Winchester championship.”

Notes: Kerr’s team is sponsored by Sabine Heating & Air Conditioning, Penske Racing Shocks by JDS, Schaeffer Racing Oil, Shearer Custom Speed, Leggett Engine Research, Boyce Racing Supplies, Speedwrapz, WRT Speedwerx, HTMA and KRS Motorsports Media. ... “I need to thank all my sponsors who have stuck by me, my family and friends who have given me nothing but support and encouragement every step of the way and my crew who puts in long hours working on the car. I could not be living my dream without the support of each and every one of them.” ... “I just feel really blessed, all the phone calls and messages I received since Saturday night has been really overwhelming.” .... Winchester hosts the Greg Kerr Memorial for Limited Late Models on Sept. 1.