James rebounds with victory at Screven 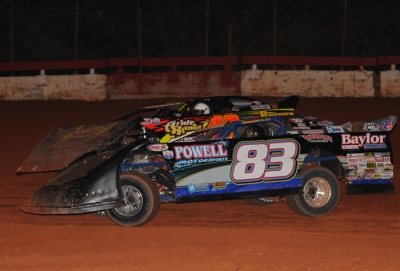 James used a unique line around the track in his by running high through turns one, two and three, and then driving off the bottom of turn four to cover the inside where Owens was the strongest. Owens settled for second while Dohm was third ahead of Randy Weaver of Crossville, Tenn., and Donnie Moran of Dresden, Ohio. The race was slowed by nine caution flags.

Terry Casey of New London, Wis., winner of the previous two Lucas Oil events, set fast time and won a heat race at Screven but could do no better than seventh in the feature.

James, who took a provisional starting spot in the previous two Lucas Oil events, earned his first series victory of the season and fourth of his career. His previous victory came June 14, 2007, at Duck River Speedway in Wheel, Tenn.

The series wraps up its Georgia tripleheader on Sunday at Golden Isles Speedway near Brunswick, Ga. Rain postponed Saturday's action at Golden Isles.