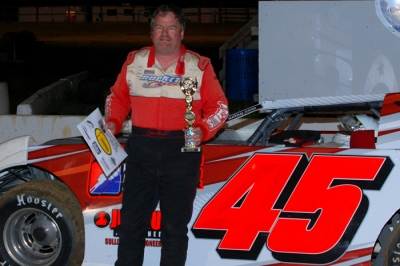 INDEPENDENCE, Iowa (May 5) — May 5 is a date that holds special meaning to the Martin name — at least at Independence Motor Speedway. Curt Martin took the lead with seven laps to go Saturday and rolled to the IMCA Late Model victory on opening night at Independence. | Weekly results

On the same date 45 years earlier, Martin's father Glen earned his first career win. It was also the 28th anniversary of Curt's first career Late Model win in weekly competition at Independence, dating back to 1984.

Polesitter Bryan Klein took the lead at the drop of the green and quickly pulled away from the field. While Klein led, Tyler Bruening, who started outside the second row, worked on front-row starter Joel Brasch for second. Bruening snuck past Brasch on the sixth circuit, then tried to reel in the leader.

With the help of lapped traffic, Bruening closed the gap by lap 11, then took over the top spot two laps later. Meanwhile, Martin was making a charge to the front from a fourth row starting spot.

Martin worked past Brasch on the 10th circuit, then closed in on the leaders as they battled through the backmarkers. Martin made his way beneath Klein on the 15th lap, then shot to the inside of Bruening three laps later to steal the top spot.

Martin survived a trio of late-race cautions to take the memorable victory. It was his 93rd career win in weekly racing at Independence and his 14th in opening night action at the track. Bruening ran second ahead of Klein, Brasch and Justin Kay.