Thornton wins at Tucson in revival of SWDRA 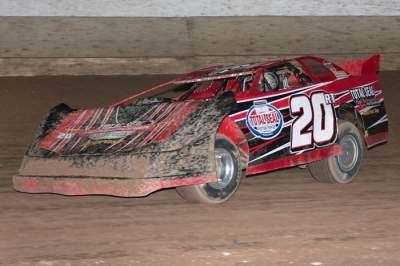 TUCSON, Ariz. (May 5) — Fourth-starting Ricky Thornton Jr. of Chandler, Ariz., overtook car owner Joey Moriarty of Phoenix, Ariz., before a lap-eight caution and led the rest of the way Saturday at Tucson International Raceway in the revival of the Southwest Dirt Racing Association. | Slideshow

Thornton earned $1,000 in a victory on the tour that briefly appeared to disband after it closed last season under the Total Seal Late Model Dirt Racing Series name.

Williams jumped into the early lead over Jerry Fincher, Moriarty and Thornton but Moriarty took command on the second lap. After a lap-three yellow, Thornton took the second spot from Williams on the sixth lap, then made what proved to be the winning move before another yellow two laps later.

Thornton continued to pull away the rest of the race while Parker, up to fourth at the lap-eight caution, dispatched of Moriarty and Williams to get the second spot. He wasn’t able to track down Thornton and settled for the second spot at the 3/8-mile oval.

Notes: Thornton’s No. 20RT is sponsored by Total Seal Piston Rings. ... Thornton is a two-time and reigning co-champion. ... The victory was his 13th career on the series. ... The race was at the formerly named USA Speedway, now under promotership of Tom Campbell after owners Pat and Lynn Robley retook control of the track from Benji Lyons. ... SWDRA’s next event is schedule for May 26 at Tucson.