Henry edges Roberts in traffic to win at Fremont 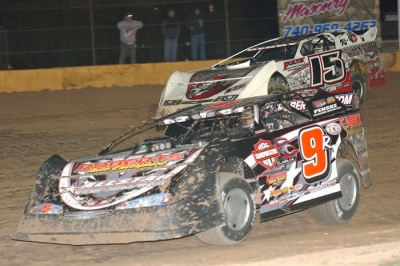 FREMONT, Ohio (May 5) — Jon Henry figured lapped traffic would come into play on a tight bullring like Fremont Speedway, and it did during Saturday night’s Sunoco American Late Model Series feature at the quarter-mile oval.

Henry of Ada, Ohio, outdueled his competitors amid heavy lapped traffic during the decisive middle portion of Saturday’s 30-lapper and used the high line to grab the lead from Curtis Roberts of Coleman, Mich. on lap 16. He then survived several late race cautions to score his second career win at Fremont on Underground Utilities Inc. Night. | Slideshow

“You do what you have to do,” said Henry, the defending series champion who scored his first victory of the season on the regional tour. “The guys were telling me it seems like the high side was fastest. So I figured if I just calm down a little bit on the top and get through the bumps. I didn’t think anyone could pass me on the bottom.”

Dusty Moore and Ryan VanderVeen led the 22-car field to the green, with VanderVeen jumping to the early lead after two restarts for lap-one cautions.

VanderVeen led the first three laps of the race before Roberts took the spot with an inside move on lap four. VanderVeen attempted to battle back as Henry moved to third on lap five.

Roberts struggled to make his way through the traffic. With Henry closing in, the two leaders darted in and out of the traffic until a lap-13 caution for John Bores slowed the pace.

Roberts couldn’t shake Henry on the restart, and Henry made the winning move exiting turn four on lap 16.

Henry survived two late restarts, and with clear track ahead for a final four-lap run to the finish, he switched up his low grove in turns three and four to go to the top shelf and pulled away for the victory.

Notes: Henry’s Engine Pro-powered Rocket Chassis receives primary sponsorship from Fultz Fabrications. … The victory is Henry’s eighth overall on the tour and second at Freemont. His first came May 30, 2009. … Garrett Krummert advanced 14 spots from 20th to sixth to earn the hard charger award during the main event. ... Up next for the series is a May 18-20 Illinois tripleheader at Kankakee County Speedway Fairbury American Legion Speedway and Lincoln Speedway.