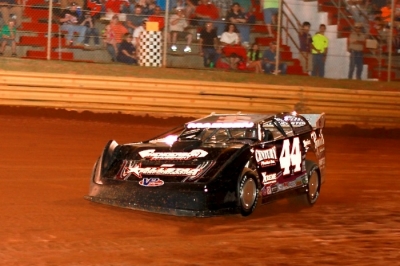 Madden, 36, raced off the outside pole to lead the entire distance, but it was a timely caution flag on lap 28 that allowed him to stay at the head of the pack. Lanigan had pulled ahead of Madden on the backstretch that circuit as the leaders negotiated lapped traffic but the 2008 series champion couldn’t complete a pass because two cars spun between turns three and four.

The remainder of the event belonged to Madden, who kept his Team Zero by Bloomquist machine firmly in command following two more caution periods. He crossed the finish line 1.826 seconds ahead of Bear Lake, Pa.’s Chub Frank, who piloted his Rocket car past Lanigan for second place on the race’s final restart with four laps left.

Lanigan settled for third place after starting sixth in his Rocket. Tim McCreadie of Watertown, N.Y., who scored his first WoO victory of the season the previous night at 311 Motor Speedway in Pine Hall, N.C., started from the pole position but slipped to fourth at the checkered flag in the Sweeteners Plus Warrior, and Tim Fuller of Watertown, N.Y., tied his season-high finish by steering his self-owned Rocket machine to fifth place.

The $10,000 triumph was the eighth of Madden’s career on the WoO tour, making him the winningest driver who has never run at least one full season as a regular on the national tour since its reincarnation in 2004. He had shared the distinction with Brian Birkhofer of Muscatine, Iowa, at seven wins.

“We were a little tight for our heat race, but we freed it up for the feature and I think we had a great race car,” said Madden, who became the 10th different winner in 11 WoO events this season. “We were able to get the lead and hold our own for the 50 laps.”

Madden’s moment of truth came when the 41-year-old Lanigan bid for the lead on lap 28. With Madden pinned behind the slower car driven by Vic Coffey of Caledonia, N.Y., on the backstretch, Lanigan surged to the outside and powered ahead of both Madden and Coffey entering turn three.

But a tangle between turns three and four involving Kent Robinson of Bloomington, Ind., and John Lobb of Frewsburg, N.Y., forced Madden and Lanigan to take evasive action and kept Madden in front.

“We got to lapped traffic and we were a little bit too tight to maneuver around,” said Madden. “When we got behind those lapped cars we got into an aero-push, and I think Darrell was gonna be a little better than us. I think in open racetrack we had a great race car, but we got lucky there with that caution taking us out of traffic.”

Lanigan, who wasn’t able to mount a serious challenge on Madden before losing second to Frank, didn’t mourn his fate. He professed satisfaction with earning his third straight third-place finish and pushing his points lead to 66 over defending champ Rick Eckert of York, Pa., who finished 19 th after engine problems forced him to relinquish fifth place on lap 40.

“I think we could’ve won if that caution didn’t come out (on lap 28),” said Lanigan, who reached second when he passed McCreadie on lap 22. “It’s kind of an unfortunate, but that’s racing.”

Frank, 50, slipped underneath Lanigan for second rounding turns one and two on the race’s final restart, on lap 46, but he didn’t have enough time to even draw within striking distance of Madden.

“I think (Lanigan) thought he had such a good car, and got such a good jump on that restart, that he could just roll around Madden on the outside,” said Frank, who finished in the runner-up WoO spot at Swainsboro for the second consecutive year. “I just filled the hole (on the inside) before he got to it and then he was stuck out there in that loose stuff.

“We didn’t have anything for Madden. He was definitely harder on tire than we were.”

Frank, who started 12th, remained winless on the WoO since August. 2009 – a stretch that has reached 93 races.

“We’re getting closer,” said Frank, whose third WoO top-five finish this season puts him just two away from matching his total from all of 2012. “If we keep running int the top five, we’re gonna get one of these races soon.”

It took two attempts for the A-Main to successfully get a lap in the books. Back-to-back red flags were thrown due to multi-car tangles between turns three and four.

The first, on the original start, swept up WoO regulars Coffey, Shane Clanton of Fayetteville, Ga., and Clint Smith of Senoia, Ga., as well as Chesley Dixon of Swainsboro, Ga., and Brandon Overton of Evans, Ga. Only Overton didn’t pit, but all of the drivers restarted the race.

The second try brought on another crash – this one with even wilder results. Jordy Nipper of Macon, Ga., ended up rolling his car onto its side in the midst of a turn-three scramble that also included Greg Johnson of Bedford, Ind., Bub McCool of Vicksburg, Miss., Ivedent Lloyd Jr. of Ocala, Fla., Chris Ferguson of Mt. Holly, N.C., and Steve Shaver of Vienna, W.Va. No drivers were injured.

McCool escaped the second crash virtually unscathed and pressed on to finish sixth. Shaver and Ferguson also came back from the accident to place seventh and eighth, respectively, while Pat Doar of New Richmond, Wis., who used a provisional to start the A-Main, was ninth and Clanton rallied from the rear to finish 10th after receiving pit-area service for damage his car sustained in the opening-lap wreck.

Fuller’s quick lap of 14.768 seconds in the 29-car Ohlins Shocks Time Trials was his eighth career WoO fast-time honor but first since June 25, 2010, at Lernerville Speedway in Sarver, Pa.