Satterlee tops Barbara for $5,000 at PPMS 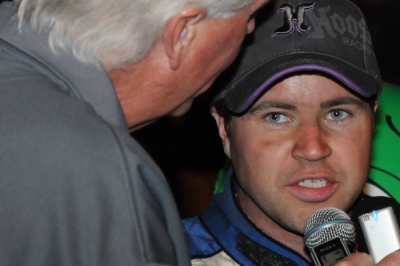 “That was pretty awesome,” said Satterlee, whose $5,000 triumph was sanctioned by the UFO Race Championship and the Kennedy Motorsports United Late Model Series. “We made some good changes after the heat race and the car was perfect. I just tried to take my time and work my way to the front and make consistent laps and it ended up being a real good night.”

Barbara of South Park, Pa., settled for the runner-up spot after starting from the pole and controlling much of the race. Alex Ferree of Saxonburg, Pa., finished third with Jared Miley of South Park, Pa., and Jason Covert of York Haven, Pa., rounding out the top five.

“The car felt pretty good there for the first half, but there were a couple cautions there that I think maybe hurt our tires,” said Barbara, who scored a $7,000 victory in the Pittsburgher event at PPMS. “That’s just the way it goes; you can’t win them all.”

Barbara and Jacob Hawkins from Fairmont, W.V. led the 31-car field to green with Barbara taking an early lead while third-starting Covert slid his way into the second position. Barbara set a torrid pace around the big half-mile as Hawkins and heat race winner John Garvin Jr., Sarver, Pa., battled for third.

The battle between Hawkins and Garvin Jr. intensified and the two made contact sending Garvin Jr. into a slide and into the turn one wall to bring out the race’s first caution on lap 12.

Barbara again pulled away from the field with Covert running second and Satterlee, climbing into the top five from his eighth starting spot.

By lap 23, Satterlee made his way around Covert for the second spot and set his sights on the leader. He was closing fast before the race’s second caution flew for a turn-two tangle that collected four cars.

A double-file restart put Barbara and Satterlee side-by-side for the restart with Barbara jumping out to the lead while Satterlee stayed within striking distance. By lap 38, the leaders reached lapped traffic and Satterlee wasted no time making his move.

Satterlee pulled alongside Barbara one lap later in turn four and completed the winning move before pulling away from the filed during the closing laps.

Notes: Satterlee’s Rocket Chassis is powered by a Roush-Yates Engine with sponsorship from Satterlee Petroleum Distributors, East American Motorsport, Integra Shocks and JNJ Motorsports Media. … The victory is Satterlee’s second at PPMS. His first came in the UFO-ULMS co-sanctioned I-Monster event in 2011. … The race was the season opener for ULMS and the second for UFO. … Michael Norris, who finished 15th Saturday, had won the only two previous Super Late Model features held at PPMS this season. … The UFO tour’s next event is slated for July 4 at Bedford (Pa.) Speedway while the ULMS tour returns to action May 12 with a $3,000-to-win event at Stateline Speedway in Busti, N.Y.