The 'Big One' eliminates O'Neal, Babb at Paducah 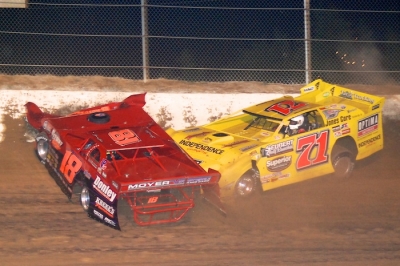 PADUCAH, Ky. (May 5) — It wasn’t the Big One by Talladega Superspeedway standards, but the first-lap pileup in Saturday’s Lucas Oil Late Model Dirt Series feature at Paducah International Raceway certainly changed the complexion of the 50-lap feature won by Billy Moyer. | Moyer wins at Paducah

The melee eliminated five drivers, including second-row starters and top contenders Shannon Babb and Don O’Neal, after the track proved to be not quite wide enough for a three-abreast dash down the backstretch in a early battle for second.

“If you get a bunch of ‘em piled up like that,” said Earl Pearson Jr., who received little damage from the incident, "you just hope for the best.”

Added Jimmy Owens: “We went in yonder and the next thing you know everybody’s scattering and it’s like a bunch of ants.”

While Pearson survived to finish fifth (and benefitted from advancing a few spots in the restart because of the five retirees) and Owens got a runner-up finish despite clipping O’Neal, it was only bad news for Babb, O’Neal, Brian Shirley, Tim Brown and Brad Neat, all who failed to complete a single lap.

Most of the damage was cosmetic and fairly minor, save the fuel cell knocked out of Neat’s car, but it was enough to erase any hopes of finishing.

It all started exiting turn two with Moyer leading the pack. Pole-starting Jason Feger slid to the outside groove, Babb held the inside line, and O’Neal tried to shoot the gap between them. Babb and O’Neal made contact, flattening Babb’s right-front tire and sending him into turn three out of control.

Babb hit the wall in front of O’Neal, who had nowhere to go, while Shirley, Brown, Neat and Pearson slid into the mess.

“I came off (turn) two and there was a hole between Feger and Babb and I went in it,” said O’Neal, who fell to fourth from second in Lucas Oil Series points. "We came down the back straightaway and it was tight and I couldn’t move out any further, and me and Babb, we bumped, and I guess he thought I was crowding him, and he just started turning right down the back straightaway and we wrecked getting into turn three.

“I think it broke something in (Babb’s) right-front from where he was banging against me coming down the back straightaway.”

Babb, who leaned into O’Neal’s cockpit a moment after the wreck to plead his case, wasn’t happy while standing on the banking and awaiting a tow truck.

“I cut down the right-front (tire) when we rubbed with somebody there off (turn) two,” he said. “I had a flat (tire) clear back there going down the straightaway. I was trying to turn left and not crash, and drove straight into the fence there.”

Babb was understanding in February when O’Neal accidentally ran him into the turn-one wall in another first-lap collision in Lucas Oil action at East Bay Raceway Park in Tampa, Fla., but not so much this time. What did he say to O’Neal immediately after the accident?

“I just thought we got too tight coming off turn two there,” Babb said. "What, were there four or five cars in there? I was all the way on the bottom as far as I could go, and it just got tighter than hell.”

Pearson couldn’t see the initial contact, but he certainly saw the out-of-shape cars accumulating between turns three and four.

“I went into turn three there and I saw O’Neal and a couple of cars piled up into the wall, and everybody was on the brakes,” he said. "There was nowhere you could go. We got into a little bit, but nothing like them other guys did. It’s unfortunate all them guys got piled up like that.”

“It was all kind of wadded up on top and I didn’t have no place to go,” added Brown. “I think Earl got me in the back end and kind of shoved me up into Babb’s car. ... I was just glad to make the race, but of course, I wish that wouldn’t have happened.”

O’Neal won the previous night’s series race at Tri-City Speedway in Pontoon Beach, Ill. Ironically, Paducah’s winner Moyer got into an early-laps scrape of his own at Tri-City, hitting an infield tire barrier and getting banged around much like O’Neal did a night later.