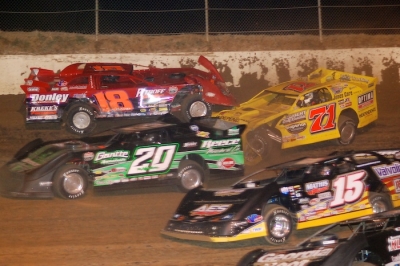 PADUCAH, Ky. (May 5) — What was shaping up Saturday night to be yet another classic duel in the long history of Billy Moyer-Scott Bloomquist battles never came to fruition at Paducah International Raceway.

With Bloomquist pulling alongside to challenge the race-long leading Moyer just past the halfway point of the Lucas Oil Late Model Dirt Series main event, a lap-34 caution for Jason Feger’s flat tire robbed fans of a clash between the Hall of Famers. | Sidebar | Slideshow | Video

As it turned out, Moyer used clear racetrack on the restart to cruise to a $10,000 victory at the 3/8-mile oval — and left everyone wondering what might’ve happened without a yellow flag. Would Moyer have held off Bloomquist?

Said Bloomquist: “The caution saved him.”

But, as Moyer added, nobody will ever know what might’ve happened in a race that will go down in the record books as a flag-to-flag Moyer victory, his 10th overall of the season and first with the Lucas Oil Series.

The 54-year-old driver from Batesville, Ark., grabbed his sixth victory in his last nine starts and rebounded from a first-lap wreck the previous night in Pontoon Beach, Ill., when he tagged an infield tire barrier.

“When you’re the leader and the guy is breathing on you and there’s lapped cars all around, it’s always nice to have a yellow, for sure,” Moyer said in victory lane at Paducah. "Sometimes it happens that way, sometimes it don’t. I’d just have had to get more aggressive to deal with the lapped cars there if I had to. I was just trying to ride along there and not tear the hot rod up. I tore enough up last night.”

Jimmy Owens of Newport, Tenn., took second from Bloomquist on the lap-34 restart and got the runner-up spot to lengthen his series points lead while Bloomquist, certain he had the best car, settled for third place for the second straight night. Ninth-starting Steve Francis of Ashland, Ky., and 16th-starting Earl Pearson Jr. of Jacksonville, Fla. rounded out the top five.

It was almost certainly a different top five than would’ve finished had a first-lap wreck not eliminated five drivers, including second-row starters Shannon Babb and Don O’Neal, a five-time Lucas Oil winner including the previous night at Tri-City Speedway.

Polesitter Jason Feger, O’Neal and Babb were three-abreast on the backstretch when contact flattened Babb’s right-front tire. He slid out of control into turn three, collecting O’Neal and Tim Brown. Brian Shirley, Brad Neat and Pearson — the only driver to continue — were also involved.

O’Neal and Babb "were gone, but there’s still another dozen back there that’s just as capable of winning the race as they were,” Moyer said.

But he still jumped into the high groove and put it in cruise control early, building a near-straightaway advantage after 10 laps while Bloomquist, Owens, Feger and Jonathan Davenport gave chase. Bloomquist cut the margin to a half-straight by lap 20, and 10 laps later, Moyer had his hands full.

Bloomquist pulled alongside several times, nosing ahead briefly in turns two and four as lapped cars held Moyer’s preferred high line. But when Feger slowed and came to a stop with a flat right-rear tire, it was clearly a turning point.

“When he was beside me, I knew I had to get up and go then,” Moyer said. “Then I think we took off (on the restart) and got a little cushion again when we got clean racetrack. It made my job easier, for sure.”

Bloomquist, who worked the middle groove while most competitors stuck with the high side, was unequivocal about feeling like he had the best race car.

“We were definitely good enough,” said the two-time series champ. "The track, it was pretty one-laned out there, and I think we got it working in the middle and we had his number. ... The caution saved him.”

Owens benefitted from Bloomquist gambling by choosing the inside lane on the double-file restart.

“We got a lot of things going our way. Scott chose the inside and that left us the high side and we got into second. We just didn’t have enough for Billy tonight.”

Notes: Moyer’s Victory Circle Chassis is powered by a Clements Racing Engine sponsored by Henderson Motorsports, L&D Trucking, Karl Chevrolet, Cooley Transport and Ohlins Shocks. ... Fifteen of 26 starters completed 50 laps. ... Among drivers failing to make the feature lineup: Kevin Cole, Scott James, Dillan White, Austin Hubbard, Wendell Wallace, Brandon Sheppard, Ronny Lee Hollingsworth, Chris Simpson, Frank Heckenast Jr. and Vic Hill, who won Friday’s tuneup race at Paducah. ... Father-and-son drivers Terry and Tanner English of nearby Benton, Ky., weren’t in action, a rarity for a special event at Paducah. Terry was without a functioning engine in his own No. 96 or the Burr Motorsports No. 33, and Tanner’s Upton Motorsports No. 96 was bent in a Friday heat race wreck ... Among Paducah specials coming up is a May 29 NASCAR Night, a Tuesday special with Kenny Wallace and track co-owners Ken Schrader and Tony Stewart in action. ... The $5,000-to-win Tri-Track Challenge is June 1, a MARS-Northern Allstars race. ... Next up for the Lucas Oil Series is a May 11-12 weekend at Hartford (Mich.) Motor Speedway and La Salle (Ill.) Speedway; both races pay $10,000-to-win.