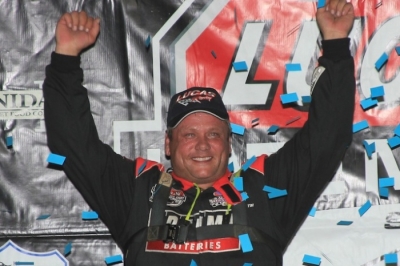 PONTOON BEACH, Ill. (May 4) — There are nights when race teams tweak, adjust and flatout change a race car to make it faster. Then there are nights like Don O’Neal had Friday at Tri-City Speedway.

“We struggled a little bit hot-lapping, and qualifying we weren’t outstanding,” said the pole-starting O’Neal, who led all but three laps of the main event. “It seemed like we didn’t touch the race car and the racetrack sort of come to us. When it started slowing down, we started getting a little better. We didn’t really change anything all night. We just kept getting good.”

Good enough that once O'Neal took the lead from fellow front-row starter Brian Shirley on the fourth lap, he ran unchallenged the rest of the way, building leads of as big as a straightaway and taking the checkers a half-straightaway ahead of fast qualifier Tyler Reddick of Corning, Calif.

Reddick, who grabbed the second spot from his chassis builder Scott Bloomquist of Mooresburg, Tenn., on a lap-39 restart, as 1.7 seconds behind at the finish with Bloomquist third. Consolation race winner and reigning series champion Jimmy Owens of Newport, Tenn., rallied from 17th to finish fourth and Wendell Wallace of Batesville, Ark., came from 12th to round out the top five.

Shirley, who said engine problems hampered his car, fell out of the top five mid-race and slid to the infield to retire on lap 36.

O’Neal, second to Owens in the championship chase, rebounded from an 18th-place finish in the previous series event two weeks earlier at Roaring Knob Motorsports Complex in Markleysburg, Pa.

“That performance out there two weeks ago in Pennsylvania, it was staggering, I’m telling you,” he said. “To have a week off and come back and sort of redeem ourselves here, this says a lot about the MasterSbilt team here.”

O’Neal’s only trouble came in his only bout with traffic at the lap-20 mark as Bloomquist and Shirley drew closer as the leader worked the slower cars. But when Shannon Babb slowed on lap 24 to draw a yellow, O’Neal began cruising again with clear racetrack.

Bloomquist fell a straightaway behind before a lap-29 yellow, and on another restart 10 laps, later, decided to restart on the inside of the double-file lineup in hopes he could work some magic.

“We just missed the setup a little bit and had to keep the car sideways to turn, and really abused our tires too much,” said the two-time series champion. "I could’ve stayed on the outside on the (lap-39) restart and run second, but I thought maybe on a restart, I was just hoping Don might go in and push on the restart and maybe we could get him on the bottom.”

Instead, the decision helped Reddick move into the second spot. He’d reached third with a bold move down the backstretch when Shirley and Brad Neat slipped up.

“When Shirley jumped (the cushion), I knew if I stayed behind him I was going to lose a lot of spots, too, and with the track (conditions) I couldn’t make it back up,” Reddick said. "And Neat made a mistake too, and I just said, ‘Hero or zero, I’m going to end up third or I’m going to end up maybe last.' But it paid off and I got into third and basically, that restart where I passed Scott was it. All in all, we went for it all night long. The car was really good. It got better and better through the night.”

Notes: O’Neal’s Jay Dickens-powered MasterSbilt is sponsored by Optima Batteries, Seubert Calf Ranches, Independence Lumber and Superior Cleaning ... His 24th career Lucas Oil victory moves him into a tie for third all-time with four-time series champion Earl Pearson Jr., who was eighth. ... Fifteen of 26 starters completed 50 laps. ... Ronny Lee Hollingsworth of Northport, Ala., making his Tri-City debut, was flirting with a top-five finish when a left-front flat tire knocked him out of contention midway through the race. ... Hall of Fame driver Billy Moyer of Batesville, Ark., who had won five of seven starts entering Tri-City, ran into trouble on the first lap with a turn-three scramble and was the race’s first retiree. ... The 48-car field was the largest of the season on the series, with several accomplished drivers failing to make the feature lineup. Among them: Jason Feger, Frank Heckenast Jr., Randy Korte, Eric Jacobsen, Klint Byars, Bobby Pierce, Chad Simpson, Chris Simpson and Ryan Unzicker. ... Rickey Frankel not only missed the feature but ended his night upside down in a heat-race crash on the first lap. His No. 33F barrel-rolled at least twice on the backstretch, but he wasn’t injured. ... Lucas Oil Series competitors head to Paducah (Ky.) International Raceway on Saturday for another $10,000-to-win event.