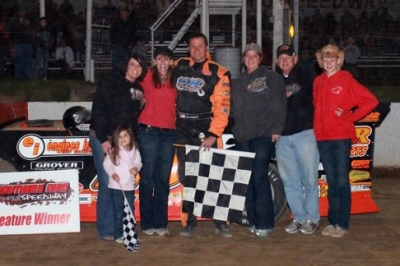 Eddie Carrier Jr. and his team in victory lane. (southernohiossportsphotos.com)

Carrier’s triumph was his third in four starts overall during a season that got a late start after he ruptured an Achilles tendon in a winter basketball game. After recovering from surgery that kept him away from Florida Speedweeks, he’s reeled off victories at Florence Speedway in Union, Ky., and two at Southern Ohio, including Friday’s unsanctioned triumph.

After a lengthy side-by-side battle, second-running Carrier used a restart on lap 35 to gain ground on the leading Hawkins and completed the winning pass two laps later.

Josh McGuire of Grayson, Ky., who handed Carrier his only loss of the season a week earlier in Wheelersburg, also moved by Hawkins late in the race to finish second on Friday night. Hawkins, who led laps 23-36, settled for third.

Hall of Famer Donnie Moran of Dresden, Ohio, was fourth and the third-place finisher’s younger brother, Jacob Hawkins, rounded out the top five finishers on a night with 35 Super Late Models in the pits.

Front-row starters Steve Francis of nearby Ashland, Ky., and Jackie Boggs of Grayson, Ky., both ran into trouble during the feature. Francis, the event's fast qualifier, led early in the race in his Barry Wright Race Cars house car, but slowed to bring out a lap-22 caution and retired to finish 16th.

Boggs, winner of last season’s Southern 50 a few months after the track’s rebirth, faded to fourth after nearly spinning on the race’s opening lap, then pulled to the pit area after sliding high and going over the track’s banking the following lap.