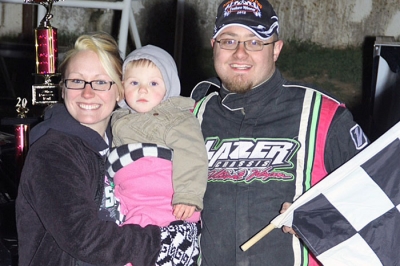 “I made the wrong decisions for the initial setup ... we were junk,” Schlenk said in victory lane. "But when the red came out the crew thrashed on this thing and when they dropped the green I knew we had this.

"They guys also told me that if Jon wins he would tie me for most career wins here — I wasn’t going to let that happen.”

The eighth-starting Henry, of Ada, Ohio, settled for second in the 30-lap feature while Matt Miller of Whitehouse, Ohio, was third. Jeff Babcock of Wayne, Ohio, and 18th-starting Russ King of Bristolville, Ohio, rounded out the top five finishers.

Schlenk and Henry put on a show for Attica fans, battling hard through the feature. But the red flag that appeared after Chris Ross of Chatham, Ontario, tore down a large section of the frontstretch fence — he wasn’t injured — with seven laps remaining proved to be the difference.

Schlenk’s crew made wholesale changes to his Lazer Chassis while track personnel patched up the fence. The difference was quickly obvious, as Schlenk drove around Henry on the restart and never looked back on route to his 12th career victory at Attica.

At the outset, Schlenk and Chris Keller paced the field to the green flag, but a Mike Bores spin required a complete restart. On the second start Schlenk took the lead over Keller, Brian Ruhlman, Henry, Ross and Miller.

Ruhlman took the second spot on the third lap with Henry up to third a lap later. Ruhlman and Henry raced side-by-side for second right on the rear bumper of Schlenk, with Henry slipping by on the sixth lap and quickly challenging Schlenk.

Henry drove under Schlenk into the top spot on the seventh lap as they raced into lapped traffic with Ruhlman, Miller, Ross, and a closing Jeff Babcock in tow. Following a caution on lap nine, Henry continued to utilize the bottom groove to lead over Schlenk, Ruhlman, Miller and Babcock.

Lapped traffic came into play by lap 13 as Schlenk drove to Henry’s outside as they battled for the lead with Miller grabbing third. Once clear of traffic, Henry opened a little breathing room over Schlenk with Miller, Ruhlman and Babcock giving chase.

Henry caught the rear of the field on lap 18, but Schlenk was struggling a bit up against the cushion. The car on the move was Russ King, who started on the ninth row and was up to seventh with 10 laps to go.

Justin Coulter and Ryan VanderVeen got together on lap 22 to bring out the caution with the running order Henry, Schlenk, Miller, Ruhlman, Babcock and King. On the restart, Ross climbed the frontstretch fence just past the flagstand, causing the lengthy race stoppage.

That’s when Schlenk’s crew went to work. On the restart, Ruhlman and Keller both spun to bring out the caution. When the green flew again, Schlenk drove his machine to the curb and rocketed past Henry who bobbled in turns one and two.

With six laps to go, Henry regained his composure and closed on Schlenk. Schlenk built enough momentum to drive to his 13th career series victory.