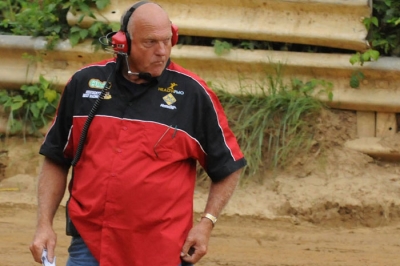 Larry Yantz, shown while officiating for the Battle of the Bluegrass, is promoting Ponderosa Speedway. (dt52photos.com)

JUNCTION CITY, Ky. — Larry Yantz milled about the solid crowd that visited the Ponderosa Speedway on 2012 season opener. He shook hands, exchanged pleasantries and genuinely looked glad to be back promoting a racetrack again. And why shouldn’t he?

The businessman, former race team owner, turned track promoter, turned retiree, is truly enjoying life and watching the place where he and so many central Kentuckians spent their Friday (and occasional) Saturday nights open to healthy crowds and healthy car counts.

“I’m loving it,” Yantz said with a big smile. “Not that it wasn’t fun last time, but this time I’m really enjoying it.”

Two years removed from his last stint at the promotional end of the Ponderosa where he experienced all the ups and downs of the promotion, Yantz has since retired from his Clayton Mobile Homes business, turning it over to his son Chad. During his time away from promoting the Ponderosa, he became a regular at the pit gate of the Bluegrass Speedway on Saturday night’s and pitched in wherever he could to help David and Anita Ferrell.

But now he’s back promoting the Ponderosa Speedway. And whether he’s talking to fans, listening to racers or riding on the back of the water truck, it seems like everywhere you see Larry Yantz, you see him smiling.

“He’s so much more relaxed and really like he’s just enjoying having a racetrack,” said track announcer Michael “Spanky” Despain. “I think before maybe where he was working and trying to run the track and worry about everything was just a lot on him. But now I think he’s having more fun than anybody here.”

The enthusiasm has spilled over to the track staff, racers and fans.

“Everybody working here is doing this because they want to be here,” Yantz said. “They all know what to do and do a good job and the thing of it is I haven’t had a meeting with everybody since we started. They all just went about their jobs and did them.”

He’s now on the grounds every day and while turning this into a daily routine, he’s not under the financial burden as before.

“I’m here every day doing something,” he said. “I go back home a couple days a week and check on my mother then I’m back here. If this hadn’t come about, I probably would go crazy.”

Yantz’s return came about over the winter when local Crate Late Model racer Kevin Colston inquired about purchasing the lease from then promoter Donnie Sullivan. Once Sullivan and Colston came to terms, Sullivan returned to racing in the Sportsman division at the Ponderosa, where he’s won three times, and Colston tabbed Yantz to promote the track so he, too, could race. Yantz jumped at the chance — then made his first order of business to inform his new boss that any officiating incidents with Colston remotely involved would result on him going to the tail.

“It’s a good deal for me because I let Larry do all the work,” joked Colston. “I just race and watch him run around.”

In the weeks prior to the opening, Yantz painted walls and restrooms, cleaned up and took care of general maintenance. The infield that once pitted all divisions, and more recently served as a hot-pit area for main events, has been cleared completely, leaving only scales and support vehicles. This allowed fans who preferred lower seats an entire view of the track.

“We’ve still got some things to do with the PA and a few other odds and ends.” Yantz said. “I had Joe Denny here last week to mainly talk to people to find out what people liked and they thought we needed to do. I’m trying to listen to everybody as much as we can and then try to do things during the week so people will see that we’re not only listening but they can see it then next week.”

He’s also listened to racers working with them to adjust tire rules for Late Models and support divisions in an attempt to increase the car count. With the Crate Late Model division yet to produce a high enough car count to offset the cost of a separate division, he’s offered weight and tire breaks along with bonuses to the highest finishers as Crate racers compete with the Super Late Models.

On the night of a visit by the Indiana Late Model Series, a touring Crate Late Model organization, Yantz considered his renewed enthusiasm.

“Everybody is working hard and we’re really trying to get up and going. If we can get everybody behind us and show them that we’re working to give the racers a good place to race and the fans a good show that gets them out at a decent hour then they support will take care of itself.”

With that, Larry Yantz slipped on his radio headset to answer a question from the tower, then made his way though the crowd where he again stopped to see a familiar face of three, all the while smiling.