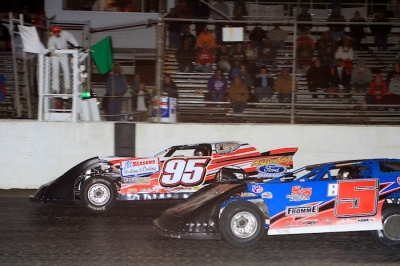 Jeff Johns (95) edges Brandon Sheppard (B5) for his first I-55 victory since 1999. (stlracingphotos.com)• view slideshow

When Jeff Johns climbed from his race car following his victory in Saturday night’s UMP DIRTcar-sanctioned feature at Federated Auto Parts Raceway at I-55, he didn’t realize just how monumental his victory was at the St. Louis-area dirt track.

Johns of Belleville, Ill., who won the race in a dramatic photo finish over Brandon Sheppard, ended a nearly 13-year winless drought at the third-mile oval. But even he couldn’t believe he’d gone that long without a victory. | Slideshow

“When I won they told me welcome back to victory lane for the first time since 1999, and I just couldn’t believe it had been that long,” said Johns, 49, who has been a regular Late Model competitor at I-55 for nearly two decades and won the division’s championship last season.

“We’ve been real competitive there. Last year we finished second like six times. We just always seemed to have something go wrong whenever we were about to win one. Still, I had no idea it’d been that long.”

When factoring in the number of runner-up finishes and near-miss victories Johns has had through the years at I-55, it’s not hard to understand how even one of the track’s most competitive drivers could go so long without a trip to victory lane. The Ken Schrader and Ray Marler co-owned track routinely draws one the toughest weekly fields of any dirt track in the country, making it challenging to win even when you’re not plagued by bad luck.

“I-55 is one of those places where you have to be on top of your game and have things go your way. I honestly think it has one of the toughest weekly shows of anywhere,” said Johns, who drives a Rayburn Race Car with a Pro Power engine and sponsorship from Heimey’s Neighborhood Inn, Lynda’s Pub, Auffenberg Ford and Precision Works Machine Shop “The guys that race there are tough and you’ve always got a couple of travelers showing up to make it even tougher.”

Sheppard of New Berlin, Ill., is one such traveling hotshoe who drops in for I-55’s weekly events from time to time. Even though Johns opened a sizable lead over Sheppard throughout much of Saturday’s 25-lap feature, Sheppard, the defending Northern Allstars Late Model Series champion, gave Johns all he could handle when a series of restarts made things interesting during the race’s closing laps.

Johns briefly thought another potential victory was going to slip from his grasp when Sheppard pulled alongside him following the race’s final restart with two laps remaining. But he survived Sheppard’s onslaught and edged ahead at the finish.

“All those restarts were killing me,” Johns said. “I had a hard time getting through the first corner on that last one and there he was right beside me. I thought ‘Oh no, this is how we lose another one.’ It was close, but we ended up holding him off.”

Now that he’s ended his lengthy winless streak, Johns doesn’t plan to wait another 13 years before winning another one.

“I probably won’t make it that long still behind the wheel, and definitely I plan to win a few more before I call it quits,” said Johns, who plans to soon cut back his own racing efforts to help his 18-year-old son Andrew with his budding racing career. “Winning makes you want to keep doing it forever if you could, but I know here pretty soon I’ll have to start looking at doing other things.”

NeSmith: With another victory and a points bonus for perfect attendance at Pike County Speedway, Mickey Trosclair jumped Jeremy Shaw of Millport, Ala., to move atop the standings. Shaw is seven points back after winning at Talladega (Ala.) Short Track on Saturday. Shannon Lee of Lumberton, Miss., is third followed by Jim McDuffie of Meridian, Miss., and Justin McRee of Cottondale, Ala.

Viking Speedway: The season opener at the Alexandria, Minn., track features a pair of $2,000-to-win WISSOTA points races for Late Models; it was postponed from the previous weekend.