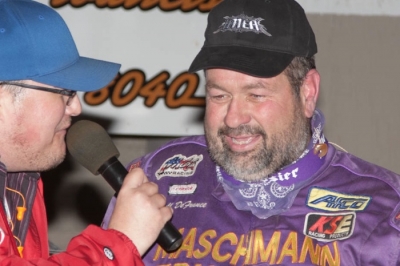 Darrel DeFrance of Marshalltown, Iowa, passed Jeff Aikey of Waterloo, Iowa, with four laps to go, then held off his familiar foe to win the Deery Brothers Summer Series feature. The victory, good for $3,000, was the career 13th for DeFrance, who also extended his perfect attendance mark to 389 consecutive tour events. | Slideshow

Aikey finished little more than a car length off the pace while Mike Murphy Jr. of Colona, Ill., moved back into sole possession of the series point lead by finishing third. Jay Johnson of West Burlington, Iowa, and hometown driver Joel Callahan rounded out the top five.

Only two cautions came out over the course of the 40-lapper, early on and then just past midway. Murphy was in front for the first 24 circuits, pressured most of that distance by the eighth-starting Aikey.

Using the high line, Aikey took over the lead and was in turn challenged by the fifth starting DeFrance, who ran the extreme inside groove.

DeFrance was just ahead when lap 32 was scored; the two were virtually side-by-side and Aikey had the edge each of the next four times around before DeFrance finally pulled in front to stay.

Notes: DeFrance’s No. 99D is sponsored by Dave’s Crane and Wrecker Service, Karl Chevrolet, Bob Maschmann Trucking and Port City Racing. ... DeFrance’s most recent Deery victories came back-to-back outings in 2008, on July 31 at Algona Raceway and Aug. 6 at Hawkeye Downs Speedway in Cedar Rapids. ... Tyler Bruening was the winner of the $250 Sunoco Race Fuels feature qualifier drawing; Bruening also earned the hard charger start and advanced a dozen positions to finish 12th. ... With the beginning of the regular point season for IMCA Late Models this coming weekend, the next Deery Series event will be May 22 at Marshalltown Speedway; Boone Speedway hosts the traditional Memorial Day show May 28.