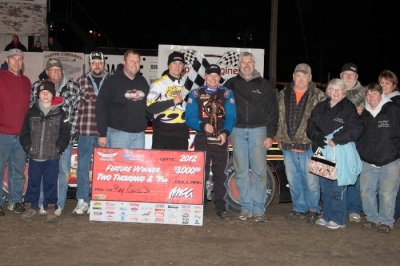 WEST LIBERTY, Iowa (April 21) – Two-time and reigning series champion Ray Guss Jr. of Milan, Ill., got back on track Saturday night and he had the point leader in the Deery Brothers Summer Series to thank for it.

The two-time defending series champion had broken his own engine during qualifying at Friday’s event at Davenport. Murphy, the winner of the last two Deery races, offered Guss his backup for the West Liberty show.

Matt Ryan started outside the front row and led the first six circuits while Joel Callahan, Andy Eckrich, Guss and Kay jockeyed behind him.

Andy Eckrich needed just five laps to race from 15th into the top five; Callahan caught Ryan for the lead on lap seven and was beginning to put some distance on his closest challengers before the only caution of the night waved on lap 11.

Restarting third, Guss went to the low side to slide past Callahan and was scored first the next time around. He was running with lapped traffic by midway and built a sizable advantage as the race stayed green.

Denny Eckrich passed nine cars in all and took over the runner-up spot in the late going, but had nowhere near enough laps to catch Guss.

Murphy finished ninth as his two-race series win streak came to an end.

Notes: Guss drives a Roberts Motorsports No. 58 sponsored by Roemer Machine & Welding, Sears Seating and Stuckey Enterprises. .. Guss started a new streak of consecutive feature starts at one; his 55-race streak was broken the previous night at Davenport after his engine woes. ... The West Liberty action was completed despite inclement weather and a brief rain delay during the modified feature. ... The 43 Late Models was the biggest turnout for the series in four 2012 events. ... Among drivers failing to make the feature lineup: Travis Denning, Tommy Elston, Bryan Klein, Mike Klinkkammer, Justin Diercks, Mike Garland, Travis Smock and Ron Boyse ... Winner of the $250 Sunoco Race Fuels feature qualifier drawing was Gary Webb. ... The final event of the tripleheader weekend is Sunday at Dubuque (Iowa) Fairgrounds Speedï¿½way. Pit gates open at 3:30 p.m. and the grandstand opens at 4:30 p.m. Hot laps are at 6:30 p.m. with racing to follow.