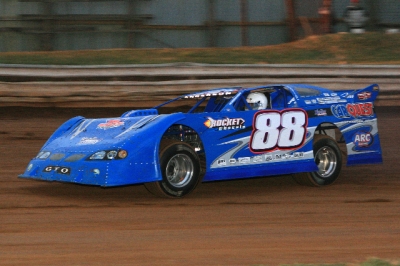 The Northern Tier United Late Model Series is instituting a pair of dashes to its race format that will set the first six rows of the starting lineup for feature events in 2008. Andrews Auto Salvage has joined the series as a sponsor and will present the Dash King award.

“Last year, I kind of wanted to start running dashes, but was unable to find a sponsor, so we stuck with the normal top 12 redraw as we have done since Day One with the series," said ULMS series directorï¿½ Chris Zuver. “This year, I thought about it again and approached Todd Andrews of Andrews Auto Salvage and he was willing to sponsor the dashes.”

A point system based on dash finishes will be maintained throughout the season and the top driver will receive a $300 bonus as the Andrews Auto Salvage Dash King award winner.

The series is scheduled to start the season on April 26 at McKean County Raceway in East Smethport, Pa. The 19th annual Jim Duffy Memorial pays $2,000 to the winner (leaders will also pick up $20 per lap). The Duffy Memorial winner earns a guaranteed starting spot in May 16's IRS-sanctioned Dave Lundgren Memorial at McKean County. — From series reports

ANDERSON WINS AT WILLIAMS GROVE: Andy Anderson of Martinsburg, W.Va., captured his second career Super Late Model victory at Williams Grove in Mechanicsburg, Pa., on March 28. The fourth-starting Anderson took the lead on the second lap and fought off Gary Stuhler for the victory. Stuhler actually went ahead on the 21st lap, but a caution negated the move. Stuhler was followed by J.T. Spence and Jason Covert. Tyler Armstrong was 10th and came back the following night for a victory in the track's usual Limited Late Model division. Other Super Late Model events at Williams Grove are scheduled for April 11 and May 9. — From track reports

IRS MAKES SCHEDULE ADJUSTMENTS: The second-year Independent Racing Series has made some schedule adjustments. The June 13 stop at Rocky Top Raceway in Coal Grove, Ohio, has been removed from the schedule. And an early-season trip to Eriez Speedway near Erie, Pa., has been pushed back to Aug. 17. IRS competitors open the season April 18 at Hilltop Speedway in Millersburg, Ohio. — Chris Tilley