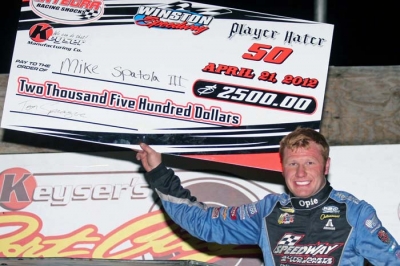 Heat winner Brandon Thirlby of Traverse City, Mich., who won last weekend’s season opener at the third-mile oval, was 16th after getting into the frontstretch wall while battling Spatola; he left with a flat tire and broken shock.

Brian Ruhlman of Clarklake, Mich., who won last weekend’s ALMS opener at Moler Raceway Park in Williamsburg, Ohio, was the first driver out in the 20-car feature with body damage.

Notes: Spatola’s Pierce Race Car has a Rhyne Competition Engine and sponsorship from Speedway Auto Parts & Wreckers, Chicago Heights U-Pull-It, Pic-A-Part, Bid Daddy Scrap, Modern Carriage Werks and Allstar Performance. ... The victory is the first of the season for Spatola in four starts. ... In 2011, Spatola’s Player Hater 50 victory was the first of seven in his rookie year. Five of his victories were sanctioned or paid at least $2,500. ... Both his ALMS victories last season came at Kankakee County Speedway in Kankakee, Ill., where he was rookie of the year and also won 2011’s opening UMP DIRTcar Summernationals event. ... This was the first season the Player Hater was part of the ALMS circuit. ... Winston returns to regular-season action next weekend. ... The next Late Model special is June 29’s Allstar Performance Michigan Dirt Cup event, a $1,500-to-win on the first-year tour.