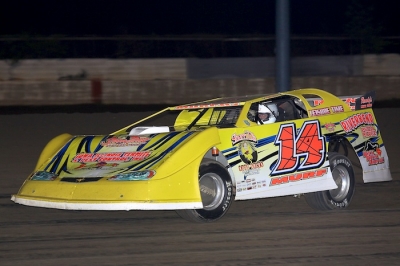 DAVENPORT, Iowa (April 20) — Mike Murphy Jr.’s second Deery Brothers Summer Series win of the season looked a lot like his first. The Colona, Ill., driver led all 40 laps of Friday’s IMCA Late Model tour main event at Davenport Speedway, pulling away from the field much the same way he did two weeks ago in winning at 34 Raceway in West Burlington, Iowa.

The outside row-one starter rocketed into the lead at the drop of the initial green and again on the restart that followed the only caution of the night, on lap three.

Murphy was checked out by midway, when Justin Kay of Wheatland, Iowa, caught Andy Eckrich of Iowa City, Iowa, for second. Lapped traffic came into play as Kay was able to reel in the leader and was trying to get his nose inside Murphy with 10 circuits left.

Murphy shut the door instead, getting a lapped car ahead of Kay before wheeling away to win by a comfortable margin. The victory, the third of his series career, paid $2,000.

Kay’s runner-up finish was his series-best showing on the series while Denny Eckrich of Tiffin, Iowa, Dan Shelliam of Hazel Green, Wis., and Andy Eckrich completed the top five.