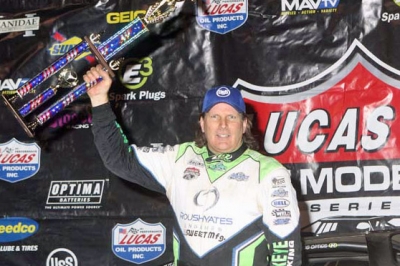 Seven days after a $25,000 victory at Virginia Motor Speedway, the 48-year-old Hall of Famer from Mooresburg, Tenn., led all but two laps Friday at Roaring Knob Motorsports Complex for a $10,000 victory, his second in a row on the Lucas Oil Late Model Dirt Series. The two-time champion vaulted to fourth from eight in the point standings, notched his 44th career series victory and continued a turnaround after early-season struggles. | Hagerstown rained out | Slideshow | Video

"We had to take time to go over our stuff, we've been working on other people's cars so much that we kind of neglected our own program,” said Bloomquist, whose Bloomquist Race Cars had three of the top five finishers. "We decided before Virginia that we needed to start running better. The car has been flawless the last two weeks and the Roush Yates Engine has been spectacular as well. I have to thank all my sponsors for sticking with us! We are back and it sure feels good.”

"I saw Jimmy there a few times on the outside, so I went to the outside and I was surprised how well the car worked up there. The track was excellent tonight, we could run anywhere and there was passing all night long. Last year it had some rough spots, but this year it was real smooth.”

Dale McDowell of Chickamauga, Ga., was third in his first series start of 2012 while Earl Pearson Jr. of Jacksonville, Fla., moved into a tie for second in points with Don O’Neal with a fourth-place finish. Tyler Reddick of Corning, Calif., rounded out the top five while O’Neal struggled to a 17th-place finish.

Bloomquist started fifth and took over on the second lap from outside front-row starter Jason Covert of York Haven, Pa., while the seventh-starting Owens was up to second by the fourth lap.

Owens pulled alongside Bloomquist a few times in heavy traffic, but untimely caution flags allowed Bloomquist to restart with clear real estate in front of him.

McDowell came from his sixth starting spot but couldn’t quite mix it up with the frontrunners while Pearson and Reddick, who started 10th, rounded out the top five.

Tim Senic of Elkins, W.Va., was sixth and the top finisher among Roaring Knob regulars while polesitter Jared Hawkins of Fairmont, W.Va., wasn’t a factor in coming home 19th.