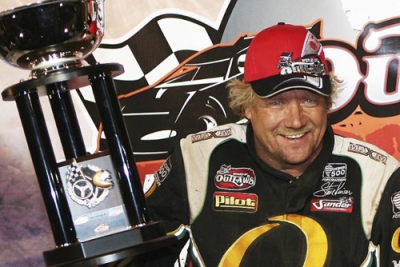 ROSSBURG, Ohio — The concrete wall ringing the dirt around the topside of Tony Stewart’s historic Eldora Speedway has intimidated just about every driver who has ever turned laps at the nationally acclaimed half-mile clay oval.

Two drivers who have plenty of respect for those walls are World of Outlaws Sprint Car Series champions Steve Kinser and Donny Schatz, who Friday were announced as the most recent additions to the driver lineup for June 6's Feed The Children Prelude to the Dream.

Kinser, a 20-time WoO champion, and his Tony Stewart Racing teammate, four-time WoO champ Schatz, are each well-versed in the fast way around Eldora. Both will trade sprint cars for Dirt Late Models as they make their first-ever Dirt Late Model starts in the all-star race featuring more than 25 world-renowned drivers from NASCAR and other forms of motorsports.

“Eldora was one of the first high-banked tracks I ever raced on, and I’d guess you’d say it made a pretty good impression on me,” Kinser said, who will pilot the Late Model of Kent Robinson. “It’s such a special place to me, and I’m honored to have been asked to be part of this event. I’ve never raced a Late Model anywhere, so I guess if there was any place where I’d want to do it, it’d be at Eldora.”

Kinser has won a staggering 570 World of Outlaws races during his illustrious career with 35 coming at Eldora. The Bloomington, Ind., native also has an International Race of Champions victory at Talladega (Ala.) Superspeedway in 1994 on his resume, as well as starts in the 1995 Daytona 500 and 1997 Indianapolis 500.

“I have no idea what to expect,” Kinser said. “Do I drive the car like a non-winged car or a winged car? I’ll have to talk with Tony (Stewart) about it. He’ll be a great asset to me because he’s been in so many different kinds of cars. I’m pretty sure his feedback will be a good starting point.”

Kinser, known as “King of the Outlaws,” began racing after a successful high school wrestling career that included an Indiana state championship during his senior year at Bloomington High School in 1976. He followed his father Bob into racing and, once he hooked up with his cousin Karl Kinser in 1978, he began building his legendary status in short-track racing. Kinser won his first-ever World of Outlaws feature at Eldora in May 1978 and picked up his first Outlaws crown later that season at Eldora.

Kinser has won more than 60 races at Eldora, including victories in USAC sprint cars, USAC Silver Crown, All-Star Circuit of Champions and several unsanctioned sprint car events, including the 1984, 1988 and 1991 Kings Royal, and 1997 and 2000 $100,000-to-win Historical Big Ones.

The conclusion of the 2010 Kings Royal — Kinser’s most recent Eldora victory — was vintage Kinser. He scraped the wall several times as he desperately tried to take the lead in the 40-lap contest and appropriately used a late-race restart that provided him one last opportunity to execute a perfect slide job to claim his seventh Kings Royal win.

Kinser hasn’t always come out on top when he’s battled at Eldora. He’s had his fair share of accidents trying to squeeze as much speed as possible out of the track.

Schatz, his TSR teammate, also has had his share of unscheduled meetings with Eldora’s unforgiving wall, but after a few hard knocks and plenty of laps, the Fargo, N.D., native has become one of the best at circling the high-banked track.

“I think the laps both Steve and I have made at Eldora may help us a little bit, but neither one of us has ever raced a Dirt Late Model,” Schatz said. “I had the chance to make a few laps one time when Tony was practicing for a race in Fargo. There were some similarities, but not many. Maybe knowing the dynamics of dirttrack racing a little better than those guys will help even the playing field.

"I think with a Late Model we might be able to run even closer to the wall. You can get away with leaning on it a bit whereas, in a sprint car, it just wants to pull you into it. The extra sheetmetal will be nice.”

Schatz first came to Eldora in the spring of 1996 as a 17-year-old ready to learn from the best. He pitted next to Kinser but, before the cars could hit the track, a North Dakota-like snowstorm hit the western Ohio facility and postponed his debut. He returned a few months later for the Kings Royal and splashed onto the scene by finishing eighth in the nationally televised event.

It was six seasons later when Schatz finally earned his first victory at Eldora. The win came in dominating fashion as he rode the high line to a $100,000 victory in the 2002 Historical Big One. As his career progressed, he became known for winning the highest-paying races and, in 2007, Schatz earned his first WoO victory by scoring the $50,000-to-win Kings Royal, winning by nearly nine seconds. His most recent victory at the track came in July 2009 when he scored his second Kings Royal triumph.

“I was pretty overwhelmed when I was invited to be part of the Prelude,” Schatz said. “You could say it’s like a dream come true to be able to represent the sprint car guys and go out and try to stake our claim at Eldora. It’s going to be quite an honor to be one of the two guys representing the grassroots racers and have the chance to compete with the elite drivers in motorsports.”

Kinser and Schatz will be the third and fourth World of Outlaws champions to compete in the event, joining Dave Blaney and Danny Lasoski, who won the 2001 Outlaws title and finished third in the inaugural Prelude in 2005. Blaney, the 1995 Outlaws champion, will be making his sixth Prelude start this year. His best finish came in 2006 when he raced to a second-place finish. The 2006 event was also the year TSR teammates Levi Jones and Josh Wise took part.

Eldora tickets and campsites are available through the speedway box office by calling (937) 338-3815 or visiting eldoraspeedway.com.