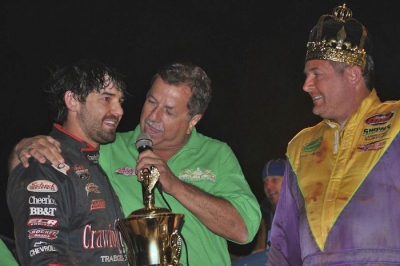 The race's runner-up finisher Jared Landers of Batesville, Ark., has been declared the winner after samples of his tires from the 75-lap race at Lancaster (S.C.) Motor Speedway were cleared by the same laboratory tests.

Autry, who started last in the race and took the lead when Landers became one of many drivers to suffer a flat right-rear tire, denied that he altered any of his American Racer tires in a phone interview Thursday morning.

“I’ve been racing for over 20 years and I’ve been barred from racetracks for fighting, but I’ve never been disqualified for anything illegal,” Autry said. “Those tires came straight from American Racer the Thursday before the race and all we did was bolted them on. I just wonder when I’m the only American Racer Tires tested, if there’s not something fishy going on with that.”

Prior to the disqualification, Autry’s victory was among the biggest upsets ever in Dirt Late Model racing. As it stands, it will also go down as the richest race ever lost by postrace lab testing of tires.

Autry hopes to avoid that, however, saying that he and car owner Lyndon McLellan are considering legal action.

“I’ve heard about people threatening to sue a racetrack or something before, but I always thought it was silly. But this right here is serious,” Autry said. “You’re taking $20,000 from my car owner and you’re taking away the biggest accomplishment of my career. I can’t just stand here and let this happen when I know we’ve done nothing wrong.”

Sommer, whose company Race Promotions managed the unsanctioned event that was touted as the biggest Late Model racer ever held in South Carolina, said that the samples taken from Autry’s tires were one of eight samples tested from the event. He confirmed that Autry’s tires were the only non-Hoosier Racing Tires to be tested, but said the sample was tested against a benchmark supplied by American Racer.

Once the initial test results came back illegal, Sommer added, he ordered two additional tests that tested the sample more in-depth. Both returned the same result.

Autry, a long-time user of American Racers and a regular competitor on the American Racer-exclusive Carolina Clash Super Late Model Series, said he purchased the tires used in the event from American Racing supplier Jimmy Smith. He immediately reached out to Smith following the disqualification and said Smith and the tire company are “standing behind and supporting” him in the matter.

When reached by phone, Smith would not comment other than that he was aware of the situation and had been in contact with Autry.

Sommer indicated that he would listen to a tire manufacturer about possible problems with the benchmark, but it would be unlikely that he would overturn the disqualification.

“If a tire manufacturer calls my phone, I’m going to listen,” Sommer said. “But there’s not much I can do. They supplied the benchmark and that’s what we have to go by. I have to uphold my rules.

“People don’t understand how many drivers expressed concern about tires at this race. Nearly all of the big touring teams asked me about testing and made sure it was going to be a high priority. I thoroughly promised and warned that we would test tires and when the results of those tests come back wrong, I’ve got to uphold my promise.”