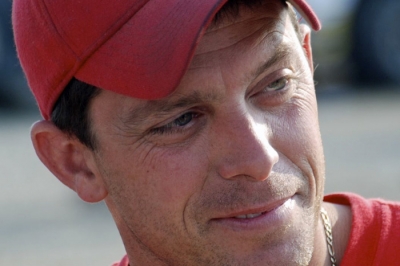 Matt Miller’s time away from racing didn’t last very long. After parting ways with McCullough Motorsports last season and considering stepping away from racing altogether, the veteran driver from Whitehouse, Ohio, has connected with long-time friend and racer Rick DeLong to field DeLong’s Rocket Chassis at Ohio-area events this season.

Miller and his new team started their season with a pair of weekly racing events at Attica Raceway (Ohio) Park, where Miller nearly won at the third-mile oval in the team’s second outing Friday night. A late bid to overtake Jon Henry of Ada, Ohio, came up just short in the 25-lapper when the 11th-starting Miller jumped the cushion while racing side-by-side for the lead with just a few laps remaining.

“We had a good car and were awfully close to getting it done,” said Miller, who stepped away from racing last season to take a full-time job with Sunoco Race Fuels distributor Corrigan Oil. “It’s a fine line when you’re running the cushion like that, and I got over it. It was a little disappointing to let one slip away, but either way it’s good to be back racing.”

Miller’s partnership with DeLong comes after a long-time friendship between the two racers. DeLong, a veteran racer also of Whitehouse, is taking some time off from driving while dealing with back problems and tabbed Miller to drive his race car.

“He’s friend of mine and actually got me in the sport a long time ago,” Miller said of his new car owner. “He’s decided to be a car owner for the time being while he’s dealing with some things so it’s a good situation for both of us. I still don’t wanna race full time and he’s fine with a more limited schedule. We both work full time away from racing, so it’s a good fit with what we’re wanting to do.”

After going nine months without racing, Miller, who had previously driven MasterSbilt Race Cars for a number of years, has spent the team’s first two events adjusting to being back behind the wheel in an unfamiliar race car. The team plans to continuing competing in a number of Attica’s UMP DIRTcar-sanctioned weekly races while also hitting a few other area ovals.

“This is the first time I’ve been in a Rocket in a long time and right now we’re just adjusting to being back racing and getting everything on the same page,” Miller said. “Right now we’re kinda doing some testing stuff, getting things going. We’ll stop in at Oakshade (Raceway in Wauseon, Ohio) a few times and maybe a few other places here pretty soon.”

Along with plans to compete in weekly events, Miller hopes to branch out to special events later in the season. While exact plans for those events remain uncertain, Miller says Eldora Speedway’s Dream and World 100 are “a given” to be on the team’s schedule. Miller won the Dream, Dirt Late Model racing’s highest-paying annual event, at the Rossburg, Ohio, racetrack in 2005.

“Going to Eldora, I don’t care what I’m in, I feel like I can be competitive,” Miller said. “I feel like that’s my niche there and I can be good there. I’m really looking forward to getting back there with these guys.” — Joshua Joiner

• One week after his first Super Late Model victory, Adam Martin of Talladega, Ala., repeated at Talladega Short Track.

• Reigning Cedar Lake Speedway champion Rick Hanestad of Boyceville, Wis., was fifth Saturday at the New Richmond, Wis., track, his third straight top-five finish in a Victory Circle by Moyer Chassis he bought from Wendell Wallace in the off-season. He also has a pair of heat race victories.

• Justin Hudspeth of Rhonda, N.C., notched his third straight NDRA Crate victory Saturday at Friendship Motor Speedway in Elkin, N.C., invoking a bounty. Anyone beating Hudspeth April 21 will receive an extra $100 with the bounty growing $100 each week; if it lasts five weeks, Hudspeth collects the $500.

• Former track champion Ray Davis Jr. of Millsboro, Del., returned to victory lane at Delaware International Speedway in Delmar, Del., Saturday night at after sitting out the entire 2011 season. "You better bet I've missed this place as much as you have missed me," Davis said in victory lane. "It's been a long year off. ... We're back, baby!"

• Ricky Begnaud won at Shady Oaks Speedway in Goliad, Texas, a track that drew six Late Models as it tries to get a weekly division rolling. ... Brent Dixon on May 14 at Gordon Park Speedway in a rare Super Late Model event for the track. ... Mickey Trosclair of Luling, La., stayed undefeated in Crate Late Model action at Pike County Speedway in Magnolia, Miss. ... Patrik Daniel topped a 14-car field in a rare Late Model event at Cowtown Speedway in Kennedale, Texas.

• Jeff Rine of Danville, Pa., notched his first victory of the season Saturday at Selinsgrove (Pa.) Speedway, outrunning the father-son duo of Jim and Dylan Yoder. Rine, going for his sixth straight track title and eighth overall, has 73 career victories at Selinsgrove.

NeSmith Chevrolet Weekly Racing Series: After three weeks of Crate Late Model points racing, Jeremy Shaw of Millport, Ala. leads with the top four drivers separated by just two points. Shannon Lee of Lumberton, Miss., and Jim McDuffie of Meridian, Miss., are tied for second one point behind Shaw while Justin McRee of Cottondale, Ala., is two points behind Shaw in fourth. All four drivers have one victory apiece.

Green Valley Speedway: The Glencoe, Ala., track hosts its first regular racing program on April 21 with stout payouts for three divisions of Late Models. Super Late Models will compete for $2,000 while Limited and Crate features each pay $1,000 to the winner.