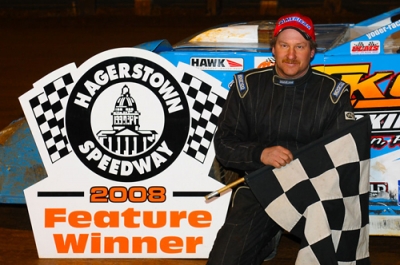 HAGERSTOWN, Md. (March 29) — Jim Yoder has turned plenty of laps at Hagerstown Speedway, and the Selinsgrove, Pa., driver now realizes, he's been charging into the corners too hard at the historic half-mile oval. He figured out his past mistakes while leading every lap of the March 29 feature for his first-ever victory at Hagerstown. | Maryland's weekly results

“I knew those guys were there and I was just keeping my line, trying to keep it going slow in,” Yoder said. “That’s the biggest thing you have to learn here. I guess we always went too fast in over the years since I’ve been coming here and I finally got it straight and figured out.”

Yoder held off challenges from reigning track champion J.T. Spence for the victory after starting on the pole via an eight-car invert. Yoder built up a four-second lead before a lap-12 caution for Marvin Winters.

“This is so cool," Yoder said. "I always wanted to win here and I’m so glad I finally did it. This thing flew down the straightaways. This is the oldest car we have. It’s a 2000 and should be worn out, but it’s the fastest thing we got.” — Bob Vores

RED CEDAR POSTPONES OPENER: Red Cedar Speedway in Menomonie, Wis., announced its opener scheduled for April 11 will be pushed back a week with the lingering effects of winter still evident, said Randy Buss, president of the Red Cedar Racing Association. “You can’t even see the racetrack right now, much less race on it," Buss said after a March 31 snowfall. "We’re going to need some warm weather to help dry out the track and the scheduled opener is less than two weeks away. It just isn’t going to happen.” Many tracks around the country that planned to start their weekly programs in late March or early April have been hampered by wet weather. — Ed Reichert

ROCKY TOP PAYING $2,000 WEEKLY: Rocky Top Raceway in Coal Grove, Ohio, is raising the stakes for Late Model drivers in 2008 by holding $2,000-to-win 30-lap features for each weekly event. The track will leave grandstand and pit admissions unchanged from 2007. “We have also had several drivers suggest a longer feature, so we hope the new purse and lap number will please our race teams," said promoter T.J. Layne. "Considering the size of the track, five extra feature laps is not bad on the teams and we will still keep the 50-minute time limit to limit extra caution laps." The season opener is scheduled for April 11. Also, Rocky Top dropped its IRS event and plans a pair of $5,000-to-win unsanctioned specials. The Tri-America Contractors 50 is scheduled for June 13 and the Engines Inc. 50 is scheduled for July 11. — From track reports