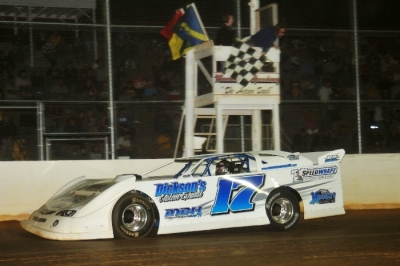 WINCHESTER, Va. (April 14) — Nick Dickson of Lewistown, Pa., led all the way in Saturday's Lee Stultz Memorial at Winchester Speedway for a $5,000 victory, his first at the 3/8-mile oval.

Starting on the pole in a 3-race-old car, Dickson maneuvered through traffic in keeping his competitors at bay in the unsanctioned event while making his first Winchester start of the season. | Slideshow

“That race felt like it was 12 hours long!” he said in victory lane. “Going green to checker like that is tough because you don’t know how big of a lead you have, and there are so many good cars here you really have to be careful in traffic, but it all worked out good for us tonight.”

Instead of 12 hours, Dickson's victory took just over 12 minutes in the non-stop affair as he became Winchester's third winner in three 2012 events.