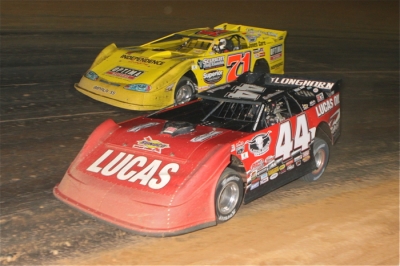 After struggling mightily for more than a year while he’s adjusted to his Bobby Labonte Racing team’s in-house Longhorn Chassis, Saturday’s performance was a major momentum boost that came at the right time for Pearson and his team.

“It’s a been a long time coming for us and this new chassis. This is a new car with a new design and it’s got four races on it and four top 10s so it’s definitely giving us a lot to look forward to,” Pearson said of the newest Longhorn car he debuted just a few weeks ago. “Everybody’s kinda wrote us off the past couple years cause we’ve been struggling pretty bad. All the fans I’m sure have been struggling along with me, so maybe they got something to cheer about now.”

Pearson’s fans had plenty to cheer about during Saturday’s 100-lap main event. After using a provisional to make the 27-car field, Pearson rallied to the front and mixed it up with the leaders for most of the second half of the race. With a number of drivers falling out of contention late with tire issues, Pearson thought he might have a shot at breaking his winless steak that dates back to his Dirt Track World Championship victory late in the 2010 season.

“There for a little while when we got rolling and got up front, I thought we had a chance at winning the thing,” said Pearson, who was second to Scott Bloomquist of Mooresburg, Tenn., at the finish of the $25,000-to-win race. “If we could have got by Scott maybe we could have been sitting in victory lane. But we’ll take what we’ve got at this point, cause I know if we just keep it up we’ll get one here pretty soon.”

The recent turn around for Pearson has been a positive sign for the new car his team built with a return to basics in mind.

Pearson will look to break his winless streak soon, and hopes the long-awaited victory will come sooner than later if his team can keep finishing near the front.

“Last year we went a whole year without a win. But 2011’s gone and there’s nothing we can do about it,” Pearson said. “We gotta just concentrate on what we’re doing now. If we can just keep getting top fives, the wins will come.”

After seeing his competitors’ tire choices just before the start of Saturday’s main event, Super Late Model rookie Stevie Long of Mechanicsville, Md., knew he would likely have trouble lasting the entire distance of the 100-lap race.

“We were tired up softer than anybody out there,” said Long, a former weekly competitor in the Limited Late Model division at VMS. “I got out of the car on the front stretch (for driver introductions) and saw what those other guys had on and I thought “oh no, this isn’t looking too good.’”

Turns out Long’s ominous thoughts were correct. After battling among the top 10 for the majority of the race, Long’s softer-compound right-rear tire went flat around the 25-to-go mark, relegating the 32-year-old driver to a 12th-place finish.

But the result was still a strong showing for the up-and-coming driver who had just four Super Late Model starts and no races of over 40 laps prior to the weekend.

“That was my first 100-lapper and I was just happy to make all 100 and not fall off the lead lap,” said Long, who plans to compete in the national tour’s doubleheader next weekend at Roaring Knob Motorsports Complex in Markleysburg, Pa., and Hagerstown (Md.) Speedway. “We learned some things and I learned a lot driving the car. I’m real excited to keep going and see if we can another good run next week with these guys.”

Long relishes the opportunity to compete with the high-caliber drivers in events like Saturday night’s and next weekend’s.

“You kinda ride behind and ride beside them guys and you learn something from them,” Long said. “Those guys are really awesome drivers and to get in there and race with them, you really can’t even describe what all you learn as a driver from something like that.”

After charging from 16th to second early in Saturday night’s race, John Blankenship thought he had a shot at a solid finish, if not a victory, in the extra-distance event. Those hopes were dashed when he became one of the many drivers to suffer a flat right-rear tire with less than 15 laps remaining.

“The car was awesome. I was just trying to ride back there and take care of my stuff, but it turned out I didn’t take good enough care of it,” Blankenship said of his disappointing result.

Blankenship felt his tire never had a chance of making the entire distance, especially after having to abuse his tire on the 14 restarts throughout the race.

“I think it was gonna go (flat) either way,” Blankenship said. “Really what killed us more than anything was all the restarts. It was kinda a one-laned racetrack, so I would have to race hard to keep my position, and restart after restart it just put a whippin’ on our tire.”

After a dominating performance in the 2011 Commonwealth 100, defending race winner Steve Shaver of Vienna, W.Va., gambled on the tire selection for his Rumley Enterprises entry, hoping it would pay off with another $25,000 victory at the half-mile oval.

But after starting from the outside of the front row, Shaver was never much of a factor. He faded outside the top five midway through the race and eventually finished sixth after pitting to change tires.

“We kinda gambled and went with what we had last year and it was just never right,” Shaver said. “I didn’t think it was gonna get that bad on tires, but I was obviously very wrong.”