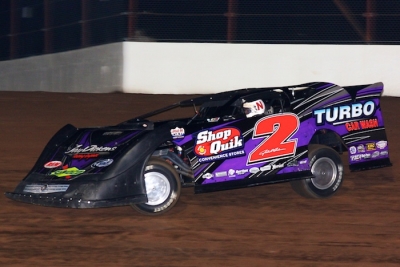 Stovall led the first two laps before a flat tire sent him pitside, and the fourth-starting Anderson outdueled Bryon Allison for a lead he'd never give up. But Stovall stormed back to the front after pitting to change a left-rear tire and was up to the second spot in the late stages.

A late caution set up a green-white-checkered finish in the 30-lapper, and Stovall nearly pulled alongside at the white flag. Stovall took another shot at Anderson entering turn three, but Anderson stayed in command to take the checkers for his 25th career series victory.

"We were fast right off the trailer. (Crew chief) Vinny (Guliani) has been working hard all week. Bossman is always there doing what we need to do," Anderson said of his Greg Junghans-owned team, which headed from Nebraska to Missouri amid unsettled weather. "It was a tough decision to leave, because there were a lot of storms up north, but we're trying to run for this deal and we've got a good fast car. Boss made the call and here we are in victory lane. It worked out really well."

Allison ran second through the early stages before pulling to the infield, and Tony Jackson Jr. of Lebanon, Mo., was up to third when he spun in turn four shortly after a lap-18 restart. Allison ended up 22nd and Jackson was 13th.

The most serious accident came on a lap-two restart when Collins made contact with Brad Looney entering turn one, triggering an accident that sent Looney briefly over the nose of the Terry Phillips car. Jason Russell also slid into the mess.