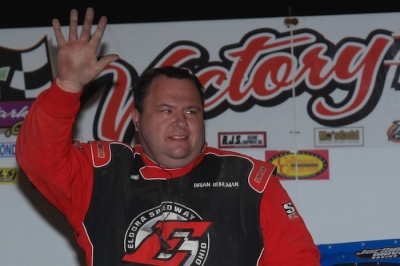 WILLIAMSBURG, Ohio (April 13) — Polesitter Brian Ruhlman knew fellow front-row starter Wayne Chinn was hot on his heels Friday at Moler Raceway Park in the season opener on the Sunoco American Late Model Series. So when three slower cars were blocking the frontrunners in the waning moments of the 30-lapper, Ruhlman felt a little vulnerable. | Slideshow | Notebook

"(Officials) were hollering at 'em on the Raceceiver to hold your line, and I don't think any one of them were," Ruhlman said. "I was about ready to punt one of 'em, and I think Chinn went ahead and did it."

Chinn's contact with Joel Ortberg brought out a caution just before the white flag flew, and the green-white-checkered restart gave Ruhlman clear racetrack that helped him finish off a flag-to-flag victory that was anything but easy on the tight-quarter mile track.

"It was a tough race," said Chinn, who pulled alongside Ruhlman a few times exiting turn four. "There wasn't a whole lot of passing up front, but it wasn't because of a lack of excitement, I can tell you that."

The 41-year-old Ruhlman, a three-time ALMS champion, earned $2,000 for his 23rd victory on the series. In winning just his second Late Model start of 2012, Ruhlman maintained some momentum from late in 2011 when he won two of his latest starts of the season, including an ALMS victory at Eldora Speedway, the Rossburg, Ohio, track where ALMS drivers are scheduled to race on Saturday.

Chinn slipped exiting turn four on the final lap and barely held off Duane Chamberlain of Richmond, Ind., who restarted fourth on lap 28 and finished a close third. Jeep Van Wormer of Pinconning, Mich., making his first start of the season, was fourth while seventh-starting Jason Jameson rallied from the tail (and barely avoided disqualification) in rounding out the top five.

Reigning track champion Barry Doss of Sardinia, Ohio, started fourth and ran in the top five early, but his race ended on the 13th lap with a broken transmission.

Ruhlman was in solid command through the first half of a race slowed by seven cautions, but after the halfway point, Chinn was able to make up ground on the leader exiting turn four, pulling alongside several times.

"I wasn't that good through the middle in (turns) three and four," Ruhlman said. "I could get through one and two really good. I had to slow down so much to stay down in the brown (part of the racing surface), and if I slipped the right rear up into the black, I couldn't get off the corner good. I knew if I just kept my momentum up we'd be all right."

Chinn, going for his first victory in his family-owned equipment in three years, couldn't get far enough alongside to make the frontstretch pass.

"We had a pretty decent car here. It was a little tight," he said. "I expected the track to be a little slicker than it was, and I had it rarin' up way too far. I'm not a big fan of carrying the left-front (wheel) and not seeing where I'm going."

Chinn's best chance to overtake Ruhlman came when the leaders hit the trio of slower cars on lap 25, causing a scramble up front that ended when Chinn got into the rear of Ortberg's lapped car in turn four.

"We had a few shots at him, and got into some lapped cars. No doubt that got a little bit hairy and I got into (Ortberg). I've gotta go down and tell him I'm sorry. Just a racing deal going for the pass, trying to get under Ruhlman there. Brian was good."

Chamberlain, who started third but lost that spot early in the race, went past Van Wormer in the final laps and nearly got by Chinn at the checkers.

"I was going for it. I knew I and something for Jeep because he was running a little bit higher groove," said Chamberlain, who piloted the Gary Engle-owned No. 15 that Chinn drove part-time last season. "I didn't think I had anything for Chinn, but he just kind of slipped up there that last corner. We about pulled it off. We'll take third."

Virtually all seven cautions were for single cars, including a pair of spins each by Kellen Kenneda and Jerry Bowersock, who drove Canadian driver Don Gordon's backup car. The most serious accident was when Tim Prince's car climbed the wall between turns three and four; after briefly hooking the car up with two wreckers, he drove off the track.

Jameson slowed running fifth on the 14th lap with what he thought was a flat tire. The Lawrenceburg, Ind., driver went to the pits and discovered it was only a bent nosepiece hampering his left-front wheel, and when he returned, officials initially black-flagged him, citing a rule that penalizes drivers who purposefully cause cautions. But officials relented and allowed him to tag the tail of the field.

Notes: Ruhlman's Malcuit-powered Rocket Chassis is sponsored by Ruhlman Race Cars, RAND and Allstar Performance. ... Jerry Rice of Verona, Ky., a $5,000 winner last year in the track's Ike Moler Memorial, set fast time but got into the frontstretch wall in his heat race. The right-side damage was too significant to the Arnold and James Hines-owned No. 24H, and the team loaded up. ... Former series champion Rusty Schlenk of Weston, Ohio, had a fast car but also got into the wall in his heat race. His crew scrambled to make repairs to the right-front corner so he could start the feature, but he was an early retiree. ... Kellen Kenneda was making just his second career start in the No. 7 owned by his grandfather Calvin; the entry was a Rayburn Race Cars Barry Doss drove four years ago. ... Jerry Bowersock drove Canadian driver Don Gordon's backup Warrior Race Car; Bowersock is waiting on a powerplant for his regular ride. ... Brian Gray's car was pushed off the track after hot laps and he scratched for the night. ... Joel Ortberg, a regular at Moler the past few season, won't be at the track as frequently as he continues his education in the motorsports program at the University of Northwest Ohio. ... The seven-car heats were lined up with four-car inversions and the top two finishers in each of three heat races redrew to set the first three rows of the main event.