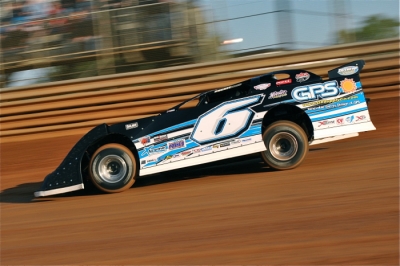 Steve Shaver (above) will start from the pole of the Commonwealth 100 feature. (DirtonDirt.com)

Shaver, who led 97 laps on his way to winning last year's Commonwealth 100 feature, will look to make it two in a row when he starts from the pole at the high-speed half-mile oval. He'll be joined up front by reigning Lucas Oil Series champion Jimmy Owens of Newport, Tenn., who turned in a dominating performance of his own to win the night's third heat race.

With the first eight rows of the feature lineup set, two consolation race's Saturday evening will each transfer three more drivers to the 100-lap feature, while provisional starters will fill the remainder of the field.

Benefitting from Dan Stone's final-lap mechanical woes, polesitter Jared Landers retook the lead exiting turn four and claimed the victory. Stone survived a tangle with Jonathan Davenport on the second lap, then overtook Landers on lap three. He pulled away through the remaining distance, but he coasted across the finish line in second after his car lost power on the final lap. Kenny Moreland finished third, while John Blankenship held off a hard charge from Jamie Lathroum to claim the fourth and final transfer position. Davenport started second, but finished eighth after contact from Stone sent him spinning on lap two.

Outside polesitter Jimmy Owens cleared Brian Birkhofer in turn two on the first lap and led the entire distance for a convincing victory. After falling nearly a straightaway behind during a green-flag run for the race's first nine laps, Birkhofer was again no match for Owens in the six-lap run to the finish. He settled for second with Ricky Elliot and Tyler Reddick also qualifying for Saturday's feature with third- and fourth-place finishes. The race's only caution appeared with nine laps complete when Dennis Franklin spun in turn two while battling with Reddick and Elliot for the third position. Scott Bloomquist was never a factor in finishing fifth. After blowing an engine in his primary car during hot laps, former race winner Chris Madden started from the tail of the third heat, but never made up an ground.

Surviving a number of challenges from polesitter Stevie Long, second-starting Rick Eckert took the lead on the opening lap led the entire distance. Long, who's making his first Super Late Model start this weekend, moved to challenge Eckert throughout the event, including a close call for Eckert when he approached the lapped car of Eric Wells midway through the race. Long also challenged Eckert on the final lap of the caution-free race, but Eckert turned back the challenge. Long settled for second with Shane Clanton third. Don O'Neal outdueled Jared Hawkins in a side-by-side battle on the final lap to take the fourth and final transfer postion. Steve Francis and Wells tangled in turn one on the first lap, causing Wells to tag the wall with the right-rear corner of his race car. Both cars continued on without a caution, but Wells was well off the pace with half his spoiler hanging off the car.

Third-starting Steve Shaver stalked race-long leader Casey Roberts from the start of the 15-lap prelim and took the lead when the high-running Roberts faltered in turn two on lap five. Shaver pulled away on his way to winning the caution-free race while fourth-starting Dennis Erb Jr. also moved by Roberts to finish second. Roberts settled for third with David Williams claiming the fourth and final transfer position. Tim McCreadie started on the pole after a two-car invert, but was never a factor in fading to a sixth-place finish.