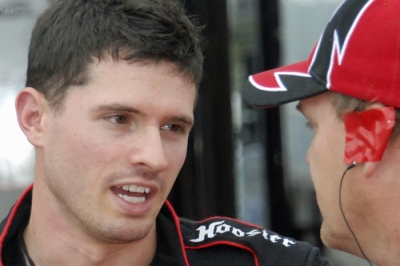 Jon Henry of Ada, Ohio, has a pair of Sunoco American Late Model Series championships and plenty of success at home-state tracks in recent seasons, but a key goal dangling out there he'd like to check off.

He'll come to Eldora Speedway's 59th season opener on Saturday gunning for his first Late Model victory at the historic track in Rossburg, Ohio. Moler Raceway Park in Williamsburg, Ohio, and Eldora host ALMS races on the April 13-14 season-opening weekend, and Henry would love to etch his name among Eldora's Late Model winners.

“I’m not going to lie to you, it’s something I want bad, really bad,” said Henry, co-champion in the Late Model division last season along with Brian Ruhlman. “But it boils down to finding your comfort zone — coming up with the right combination of patience and aggression. I haven’t found that zone yet, but I’m getting close.”

Henry's seven career ALMS victories and other success has been satisfying, but Eldora is on a different level.

“It’s Eldora, what can I say? Eldora has so much prestige and history," Henry said. "You get behind the wheel, line up on the racetrack and start to think — this is Eldora. Instantly the adrenaline kicks up 10 notches, and if you don’t watch out, it can get the best of you. I can’t think of any other track that does that to me.”

“I had won multiple times at Limaland and elsewhere, yet it took me three years to overcome Eldora," he said. "I had to learn to slow down to go fast. Let’s face it; I had to learn to quit trying to knock down the wall.”

Among drivers expected to join Henry for Saturday's $2,000-to-win event are Brian Ruhlman, Jeep Van Wormer, Jerry Bowersock, Scott James and Darrell Lanigan. Van Wormer sits atop the ALMS victories list at Eldora with a half-dozen triumphs. Ruhlman has five and Bowersock four. Overall, 30 drivers have won in 65 ALMS events at Eldora since the first series season in 1995.

Tickets for Eldora's season opener are available at eldoraspeedway.com or by calling (937) 338.3815. — Larry Boos

The first-year Battle of the Eastern All Stars Tour — the tour nicknamed BEAST — is getting ready to kick off its inaugural season April 21 at Cherokee Speedway in Gaffney, S.C. Super Late Models will battle for a $4,000-to-win purse in the Rock Gault Memorial, a race honoring Ed "Rock" Gault, who owned and promoted the track more than 30 years.

"He made Cherokee Speedway the home to himself and his family, I am honored to be a part of this great event," said Cherokee promoter Lennie Buff.

"I loved that ol' man," said former racer C.L. Pritchett of Commerce, Ga. "We would come up there from Georgia and take that money from those North and South Carolina boys, and Ol' Rock would always make sure we were coming back the next week. If we had trouble, he made sure we had enough to get back home."

Former Cherokee announcer Duane Goins remembers the man that touched many in the region while promoting the historic track.

"You had to listen real close to what he was saying, but he always made a point," Goins said. "He really saw the big picture, no matter what was going on. He used to come up on Saturday when he declared the track ready to race on and would show me how it looked. I used to tell him that if he did it long enough, he might get it right.

He liked me to pick at him, and he always returned it in some way. That's my Rock Gault, and I'm sure for many others. The racing community misses him. I still miss him."

Besides Late Models, limited sportsman, crate sportsman, renegade, young gun and modifieds will be in action. Gates open at 5 p.m. with the drivers' meeting at 7 and hot laps to follow. For more information, call (864) 489-1969 or visit cherokeespeedwaysc.com. — Jason Curd

Chad Stapleton of Edinburg, Ind., achieved a benchmark Saturday at Brownstown (Ind.) Speedway by capturing his first feature victory at the quarter-mile oval. The victory was his second of the season overall for the 36-year-old driver.

“To win at Brownstown is a big deal to me," Stapleton said. "I mean, when you think of all of the history at that place, and all of the great drivers, who have raced there. ... This win is really special, and I can’t thank my team members enough for all of their hard work on this race car."

Brownstown drew 27 cars for the event and Stapleton won the second heat race to earn a front-row starting spot outside young Tyler Allen.

Stapleton jumped into the lead at the outset of the main event, fighting off challenges from Kent Robinson of Bloomington, Ind., for the victory. Robinson settled for second with Greg Kendall, Mark Barber and Chris Streeval rounded out the top five. — Ben Shelton

Brandon Sheppard of New Berlin, Ill. sits atop the UMP DIRTcar's weekly points as the organization's season beings to pick up springtime steam. The points season is actually in its 11th week overall, but from Jan. 1-March 25 only a driver’s best points night each week was counted. All DIRTcar UMP-sanctioned races can be counted toward drivers’ points totals during the regular weekly-points season, which started on March 30 and stretches through Sept. 30.

A feature winner once this season in UMP action (March 24 at his home state’s Highland Speedway), Sheppard ushered in the month of April with a busy three-race weekend. He finished 11th on April 6 at Farmer City (Ill.) Raceway, ninth on April 7 at LaSalle (Ill.) Speedway and fifth on April 8 at Quincy (Ill.) Raceways.

Kloos has been the hottest UMP driver this season, totaling two wins (March 31 and April 7 at Highland), two second- and two third-place finishes in six starts. Last weekend he accented his victory at Highland with a runner-up finish on April 6 at Belle-Clair Speedway in Belleville, Ill. — Kevin Kovac