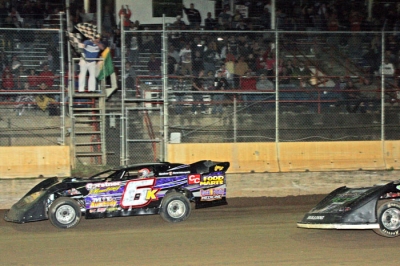 Zobrist, the reigning track champion, settled for second followed by Matt Weidner, Rick Salter and Scott Schmitt, who rallied after a lap-10 spin in the regular season event.

Mark Voigt, looking to rebound after mechanical failure robbed him of a March 31 victory, jumped into the lead at the outset with Zobrist chasing him in the low groove. Zobrist edged into the lead on the sixth lap while Voigt and Schmitt battled for second behind him. Schmitt's lap-10 spin sent him to the tail.

Zobrist led Voigt and Kloos on the restart, and the running order was the same for the next restart after Mike Schulte's lap-15 spin.

Voigt's high groove started paying off as he closed on Zobrist, but two cars spun in front of the leaders on the 19th lap. Zobrist lifted to avoid the spinners, but Voigt had a full head of steam coming out of turn four and swerved to the left. He clipped the left-rear of Zobrist's car, resulting in a collision that ended his night. Zobrist was able to continue with only sheetmetal damage.

Zobrist led the field back to green with six laps remaining, and Kloos took up the charge while running the low groove. But he switched to the high groove and closed in on Zobrist.

Coming out of turn four toward the checkered flags, Kloos got around Zobrist for his second victory of the season at Highland.

Notes: Kloos is sponsored by Gerstner Plumbing and CC Food Marts. ... The track's UMP DIRTcar-sanctioned Late Model division is sponsored by Becker Jewelers. ... The track inducted late car owner and driver Chris Bargetzi into the Highland Speedway Hall of Fame as the first inductee. ... Bargetzi’s last race car, the yellow No. 441 sat in Casey’s General Stores victory lane throughout the night. ... The track hosts regular events until the $5,000-to-win Late Model special on May 31 co-sanctioned by the MARS DIRTcar Series and the Northern Allstars Late Model series.