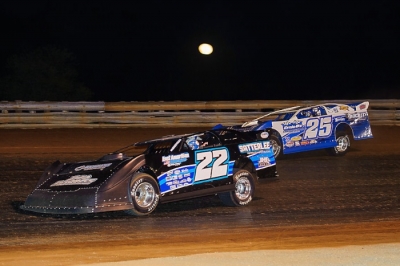 Richards pestered Satterlee lap after lap following a mid-race restart — following a caution that erased a move by Richards into the lead — but Satterlee held on at the finish.

With two laps remaining, Richards had a head of steam and drove under Satterlee into turn three, but Satterlee cut short and dove back under to regain the spot and head to the white flag. As Richards regained his momentum, Satterlee was gone and stretched his lead to eight lengths around the final circuit.

“I knew Josh, (Jason) Covert and those guys would be good,” the pole-starting Satterlee said. “We were a little worried on that first caution there. Josh just got around me. We got caught up in lapped traffic so I tried to pick up the pace a little bit. The lapped cars, I timed them right and didn’t catch up to them at the end.”

Satterlee started on the pole with Dickson alongside following the pill draw for the top three from qualifying heats. A quick caution appeared when Gary Stuhler ending up turned around out of turn one, regrouping the field.

Richards was seventh for the restart, but with no one on the high side, he made use of it in the Ernie Davis-owned No. 25 and charged all the way to third by completion of the second lap. Brian Booze regained third from Richards on the fifth lap as they tried to chase down Dickson and Satterlee, who was out front by 1.44 seconds.

Satterlee caught lapped traffic on the 10th lap as Richards got past Dickson two laps later with Satterlee in his sights. Richards charged into the lead on the 13th lap, only to have the yellow displayed for a spun car in the first turn.

Following the restart, Satterlee changed his game and was on the offense as Richards was trying everything to make the pass. But Satterlee continued steady as the laps wound down with Richards going for broke with two to go. It was an exciting move when Richards shot past only to have Satterlee on the gas and coming out low to retake his lead for the final round.

“Josh ran me clean and it was a good race,” Satterlee said. “It was a good pill draw on the pole, but we had a really good car tonight. “

Notes: Satterlee's Rocket Chassis has a Roush Yates powerplant and sponsorship from Satterlee Petroleum Distributors and East American Motorsports. ... Satterlee earned an extra $100 for completing the race with a dozen eggs affixed to the rear of his car on Egg Night. ... Fourth-finishing Jamie Lathroum had heavy smoke show taking the checkers, giving him the Nininger Tire and Auto Hard Luck award. ... Alan Sagi's 16th-to-eighth run gave him the Nininger Hard Charger award. ... Hagerstown's Super Late Models are sponsored by Buchanan Auto Stores. ... Denton Boyer was disqualified from Saturday's action for retaliating after he spun in a heat race. ... In the Limited Late Model division, Wayne Walls Jr. of St. Thomas, Pa., caught a break when he maintained his position despite contact with Pete Weaver as a late caution appeared. Walls held off Justin Weaver by a half-length for his 46th Hagerstown victory. ... Hagerstown hosts the Lucas Oil Late Model Dirt Series for the 31st annual Stanley Schetrompf Classic on April 21.