Vaught rallies from 12th for victory in I-80 debut 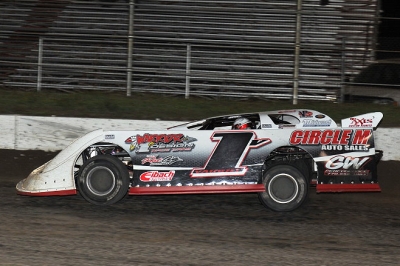 Will Vaught heads to victory after starting 12th at I-80. (fasttrackphotos.net)

GREENWOOD, Neb. (April 7) — Will Vaught made his first racing trip to Nebraska a successful one with a victory Saturday at I-80 Speedway. The 25-year-old driver from Crane, Mo., led the final seven laps for a $3,000 victory co-sanctioned by Lucas Oil MLRA and the Dart Corn Belt Clash.

"I knew in the first couple laps we had a good car," said Vaught, who started outside the sixth row at the 4/10-mile oval between Omaha and Lincoln. "This track, it's a racy sucker. You can't ask for much more."

Vaught overtook Chris Simpson of Oxford, Iowa, on the 24th lap after a restart. Simpson held on to finish second with Terry Phillips of Springfield, Mo., in third. Polesitter John Anderson of Omaha was fourth and Tim Isenberg of Marshfield, Wis., rounded out the top five.