Back from heel injury, Carrier wins at Florence 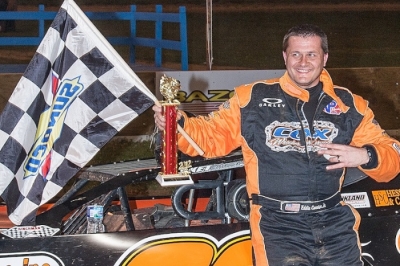 UNION, Ky. (April 7) — After the start of his season was delayed by injury, Eddie Carrier Jr. of Salt Rock, W.Va., didn't take long to get rolling.

Competing in his first race of the season, the 41-year-old Kentucky native took the lead after a lap-18 restart Saturday and Florence Speedway, then dominated the remaining laps for a $3,000 victory. | Slideshow

Carrier, who has been sidelined since surgery to repair a ruptured Achilles tendon in early February, rallied from his 18th starting spot to his second career victory at the half-mile oval.

The race had four different leaders, but once Carrier took the lead on lap 19, he went unchallenged the rest of the way building nearly a straightaway lead over runner-up Rod Conley of Wheelersburg, Ohio.

Jameson would hold the point over Conley and Carrier until the only caution of the race came out with 18 laps complete for debris on the racing surface.

On the Delaware double-file restart, Carrier was on the outside of Conley and quickly moved by him, then repeated the move on Jameson a lap later.

Jameson finished third followed by Cody Mahoney of Madison, Ind., getting behind the wheel while taking break from crewing duties with Don O'Neal. Williams rounded out the top five and Jerry Rice of Verona, Ky., came from 22nd to sixth.