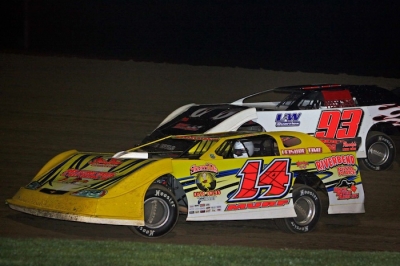 WEST BURLINGTON, Iowa (April 7) – Once Mike Murphy Jr. got into the lead, the race was for second in Saturday’s Slocum 50 at 34 Raceway.

The Colona, Ill., driver took the $3,000 checkers half a lap ahead of runner-up Tyler Bruening of Decorah, Iowa, lapping all but five competitors at the second Deery Brothers Summer Series race of the season. | Video | Slideshow

Hometown driver Jay Johnson led the first six times around the track from the track before giving way to the eighth-starting Murphy, who set sail from that point. What proved to be the only caution of the night had come out on lap three and Murphy was lapping cars by the 17th circuit. He cruised to his second career series victory.

Brenton Slocum, IMCA Late Model track champion at West Burlington in 2004, was remembered with the missing man formation during parade laps. 34 Raceway also raised and contributed more than $1,000 Saturday evening for the scholarship fund in his name that benefits area high school students.