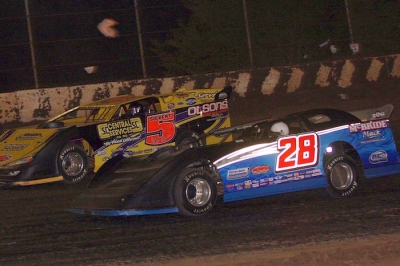 The 39-year-old Erb, who started fourth at the quarter-mile oval, won the non-touring UMP DIRTcar-sanctioned event for his first home-state victory since August 2010. | Slideshow

Seventh-starting Brian Birkhofer of Muscatine, Iowa, rallied to finish second with Frank Heckenast Jr. of Frankfort, Ill., in third. Shannon Babb of Moweaqua, Ill., and Ryan Unzicker of El Paso, Ill., rounded out the top five on a night with 32 Super Late Model teams in the pits.

Brandon Sheppard and Sievert started on the front row with Sievert taking command early in the race. Erb took the second spot from Sheppard on the sixth lap, then moved into the lead two laps later.

Erb pulled away to a comfortable lead after a dozen laps while Sievert was holding his own in the runner-up position while Heckenast and Sheppard duked it out for third.

At the halfway point, Erb had nearly a half-track advantage as he worked lapped traffic. Birkhofer worked his way into second and cut into Erb's lead, but settled for the runner-up spot.